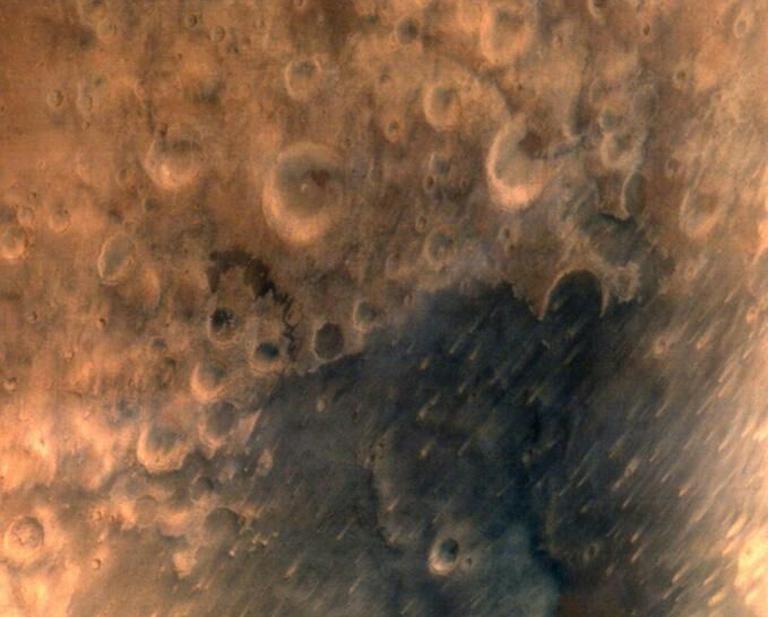 India’s spacecraft has beamed back its first photos of Mars, showing its crater-marked surface, as the country glowed with pride Thursday after winning Asia’s race to the Red Planet.

The Indian Space Research Organisation (ISRO) uploaded one of the photos to its Facebook page, showing an orange surface with dark holes, taken from a height of 7,300 kilometres (4,536 miles).

ISRO also posted the photo on Twitter, with the caption “The view is nice up here”.

The organisation’s senior scientist V. Koteswara Rao said the spacecraft, called the Mars Orbiter Mission, has taken a dozen photos and that everything was working well.

“The Mars colour camera on board started working soon after Orbiter stabilised in the elliptical orbit of Mars and has taken a dozen quality pictures of its surface and its surroundings,” Rao told AFP.

“The camera will also take images of the Red Planet’s two moons and beam them to our deep space network centre,” he added, referring to the base near the southern city of Bangalore.

“Health and other parameters of the spacecraft are fine and all the essential functions are performing normally.”

India became the first Asian country to reach Mars on Wednesday when the unmanned Mangalyaan spacecraft entered the planet’s orbit after a 10-month journey, all on a shoestring budget.

The mission, which is designed to search for evidence of life on the planet, is a huge source of national pride for India as it competes with Asian rivals for success in space.

India beat rival neighbour China, whose first attempt flopped in 2011 despite the Asian superpower pouring billions of dollars into its programme.

It also represents just a fraction of the cost of NASA’s $671 million MAVEN spacecraft, which successfully began orbiting the fourth planet from the sun on Sunday.

India now joins an elite club of the United States, Russia and Europe who can boast of reaching Mars. More than half of all missions to the planet have ended in failure.

No single nation had previously succeeded on its first go, although the European Space Agency, which represents a consortium of countries, pulled off the feat at its first attempt.

Scientists presented the Mars photos on Thursday to Prime Minister Narendra Modi who was on hand in the command centre to witness the achievement.

“The success of our space programme is a shining symbol of what we are capable of as a nation,” a jubilant Modi said on Wednesday.

Indians, from government ministers to office workers and cricketers poured onto Twitter to show their national pride, while school students celebrated by eating traditional Indian sweets.

“The space exploration arena is getting crowded and it is important to be ahead of your competition,” the Hindustan Times said in an editorial.

“India, by becoming the first Asian country to launch a successful Mars mission, has taken the wind out of the sails of nations like China, Japan and South Korea,” it said.