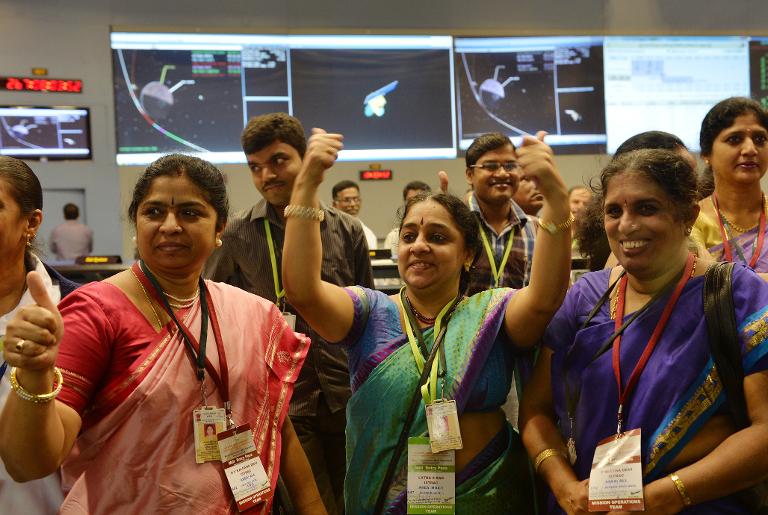 India won Asia’s race to Mars on Wednesday when its unmanned Mangalyaan spacecraft successfully entered the Red Planet’s orbit after a 10-month journey on a tiny budget.

Scientists at mission control let out wild cheers and applause after the gold-coloured craft fired its main engine and slipped into the planet’s orbit following a 660-million kilometre (410-million mile) voyage.

“History has been created. We have dared to reach out into the unknown and have achieved the near impossible,” a jubilant Prime Minister Narendra Modi said at the Indian Space Research Organisation’s (ISRO) base near Bangalore.

“The success of our space programme is a shining symbol of what we are capable of as a nation,” Modi said, grinning broadly and embracing the ISRO’s chairman.

The success of the mission, which is designed to search for evidence of life on the Red Planet, is a huge source of national pride for India as it competes with its Asian rivals for success in space.

Indians from ministers to students and office workers took to Twitter to express pride, with the Hindi slogan “JaiHind” or “Hail India” trending on the microblogging site.

India has been trying to keep up with neighbouring giant China, which has poured billions of dollars into its programme and plans to build a manned space station by the end of the decade.

At just $74 million, the mission cost is less than the estimated $100 million budget of the sci-fi blockbuster “Gravity”.

It also represents just a fraction of the cost of NASA’s $671 million MAVEN spacecraft, which successfully began orbiting the fourth planet from the sun on Sunday.

India now joins an elite club of the United States, Russia and Europe who can boast of reaching Mars. More than half of all missions to the planet have ended in failure, including China’s in 2011 and Japan’s in 2003.

No single nation had previously succeeded at its first go, although the European Space Agency, which represents a consortium of countries, pulled off the feat at its first attempt.

Scientists announced at 8:02 am (0232 GMT) that Mangalyaan had entered the orbit. Now the probe is expected to study the planet’s surface and scan its atmosphere for methane, which could provide evidence of some sort of life form.

Mangalyaan is carrying a camera, an imaging spectrometer, a methane sensor and two other scientific instruments.

NASA congratulated India’s “Mars arrival”, welcoming Mangalyaan, which means Mars vehicle in Hindi, in a tweet to “the missions studying the Red Planet”.

“It was an impressive engineering feat, and we welcome India to the family of nations studying another facet of the Red Planet,” NASA administrator Charles Bolden said in a statement.

Indian engineers employed an unusual “slingshot” method for Mangalyaan’s voyage, which began when it blasted off from India’s southern spaceport on November 5 last year.

Lacking enough rocket power to blast directly out of Earth’s atmosphere and gravitational pull, it orbited the Earth for several weeks while building up enough velocity to break free.

But supporters say it is the perfect opportunity to showcase India’s technological prowess as well as a chance for some one-upmanship on its rival Asian superpower.

“The rivalry between regional giants China and India exists in space too and this gives India the opportunity to inch ahead of China (and capture more of the market),” Bagla told AFP.

“This is the pride of India, the pride of Asia, and is a landmark of the progress of humankind’s exploration in outer space,” said foreign ministry spokeswoman Hua Chunying at a daily briefing.

India has launched 40 satellites for foreign nations since kick-starting its space programme five decades ago. But China launches bigger satellites.

ISRO scientists said the Mars Orbiter Mission, or MOM, had “proved” India’s “technological capabilities” and showed it was capable of venturing further.

The probe is expected to circle Mars for six months, about 500 kilometres from its surface, and send data back to Earth.