Home World Despite truce Gaza fishermen under fire at sea 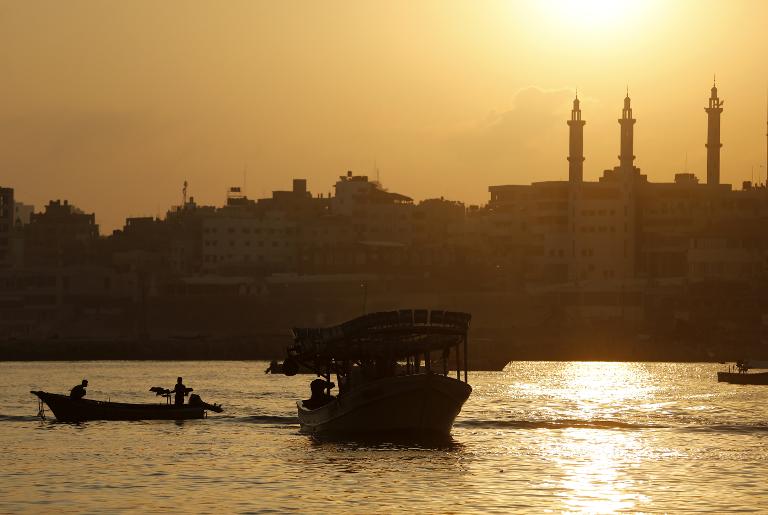 Every time Gaza fisherman Rami goes to sea, the same thing happens: five nautical miles offshore, shots ring out and a voice over an Israeli loudspeaker demands he turn back.

Officially, Gaza’s fishing fleet has the right to trawl the waters up to six nautical miles off the shore under the terms of Israel’s eight-year blockade.

Although that outer limit has frequently been reduced, or even cancelled outright over the years, it was formally reinstated by virtue of an August 26 truce agreement which ended a deadly 50-day war between Israel and Hamas militants.

But nearly a month after the ceasefire took effect, even those six nautical miles — which the fishermen say is not nearly enough — are unattainable.

One afternoon, Rami Bakr and his 10-man crew put to sea for a 10-hour fishing expedition. With them was an AFP team.

Very quickly, warning shots skimmed the boat as an Israeli navy vessel approached. On board were around a dozen soldiers armed with machine guns, shouting through a loudspeaker for them to stop.

“These are the worst conditions we’ve ever known,” said the 41-year-old fisherman, who has spent more than three decades of his life fishing the waters off Gaza.

“During the war, the Israelis bombed fishing huts on the beach and now they are preventing fishermen from earning their crust at sea,” he said.

The Gaza Strip has long been known for its plentiful seafood and fish although the stocks have been depleted by pollution, frequent wars and the blockade.

Today, the coastal enclave counts some 4,000 fishermen, more than half of whom live below the poverty line, said Nizar Ayash, head of the Gaza fishermen’s syndicate.

During the recent seven-week war, 80 of Gaza’s fleet of around 1,500 fishing boats and dozens of fishing huts were destroyed in the Israeli bombardment, which also reduced nets and fishing equipment to ashes, he said.

For Ayash, the problems experienced by Rami are widespread.

“Since the ceasefire, many Israeli attacks have been reported,” he said, referring to repeated shooting at fishing vessels.

With their tackle destroyed and the price of oil soaring, Gaza’s fishermen are almost working at a loss.

Today, a single fishing expedition can cost up to about $500 (roughly 400 euros), said another fisherman called Mehdi Bakr, who lost his hand when an Israeli navy vessel fired at his boat in 1997.

For every night on the water, they need 270 litres (59 gallons) of diesel and 250 litres of petrol, he explained.

And all this for a very small catch.

“September and October is sardine season and they are only found between six to nine nautical miles from the shore, so with a six-mile limit, we’re bringing home hardly anything,” explained Taha Bakr, a 24-year-old member of Rami’s crew.

Because fishing is a trade passed on from father to son, and because he can no longer provide for his family and the job is so dangerous, the young man with green eyes and a neatly-trimmed beard has signed up to journalism school.

“It’s so that I don’t have to fish again, that job is just too risky,” he told AFP.

Maria Jose Torres, deputy head of office in the Palestinian branch of the UN humanitarian agency (OCHA), said that the 1993 Oslo Accords established a fishing zone of up to 20 nautical miles.

“It is essential to increase the fishing zone beyond six nautical miles to allow the fishermen to earn their living,” she said, indicating that the vast majority today are unable to support themselves.

“Some 84 percent of them are only able to survive thanks to help from the UN,” she said.

Rami said he keeps putting out to sea so that he can feed his children.

“It has been a long time since we last heard the singing and laughter of fishermen at sea who returned with their nets full,” he said.

But Mehdi fears for the future of this millennia-old profession in Gaza.

“We, the young generation, are not happy with this. If it carries on like this, there won’t be any more fishing in Gaza at all,” he said.