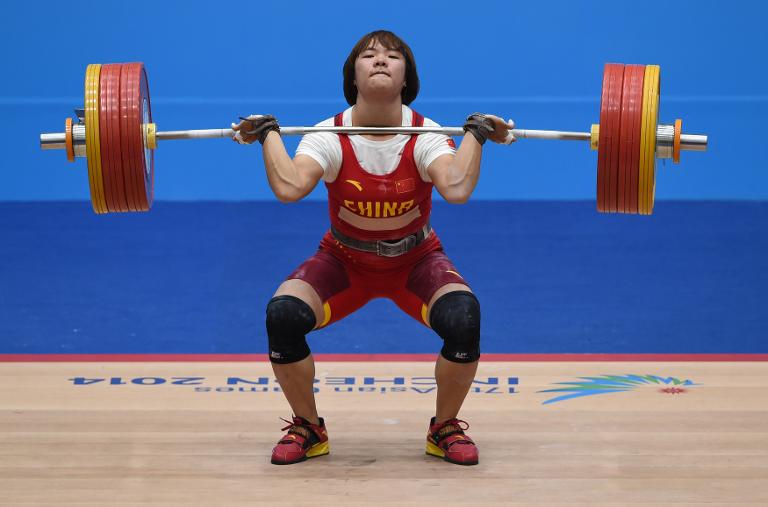 Trailing by 3kg after the snatch in yet another battle between the two Asian lifting powers, Xiang was in a league of her own in the clean and jerk, lifting 145kg on her first attempt to secure gold after Ryo could only make a best of 141kg.

She then increased that to 150kg to give her an Asian Games record total of 268kg against her rival’s 262kg.

“Actually, this was the first time I had to come from behind after the snatch so I’m very pleased,” Xiang told AFP, referring to last year’s world championships where she made a snatch of 123kg as the pair finished one-two again

On Wednesday she only managed 118kg and unusually failed twice at 122kg the first half of the competition.

“Normally I’m equally strong in both disciplines, so I’m glad today I could still win despite being below my best early on,” Xiang added.

“I’m confident I can do better again at the world championships (in November).”

North Korea’s Ryo, again enjoying enormous support from her teammates and delegation plus the ever-present red-clad South Korean Arirang Tongil (unification) Cheerleaders, raised a huge roar when she set a Games record with 121kg for the first discipline.

But it was short-lived. Xiang’s third attempt at a personal best weight of 153kg failed, but she already had China’s third gold in the Moonlight Gardens weightlifting Arena tucked away by then.

Huang Shih-hsu of Taiwan took the final podium position on 233kg after a brief moment of controversy threatened to scupper her medal chance.

Huang’s final 128kg lift was ruled good by a 2-1 majority of the judges but overturned by the five-person jury as she was deemed not to come to standstill.

After nail-biting wait, fourth-placed Manzurakhon Mamasalieva of Uzbekistan failed with her final two attempts and Huang could finally celebrate her bronze.

“There are three referees and five jury members, the referees will give the signal for a good lift,” technical official Hafiz Imran Butt of Pakistan explained to AFP.

“A good lift is completed within one minute and the lifting motion must come to a stop. The jury members will examine the decision of the referees and they may reverse the decision if it is not in line with the rule book.”

China and North Korea now both have three golds and three silvers from nine events in the weightlifting arena, but China have edged ahead in the table with two bronzes to North Korea’s one.