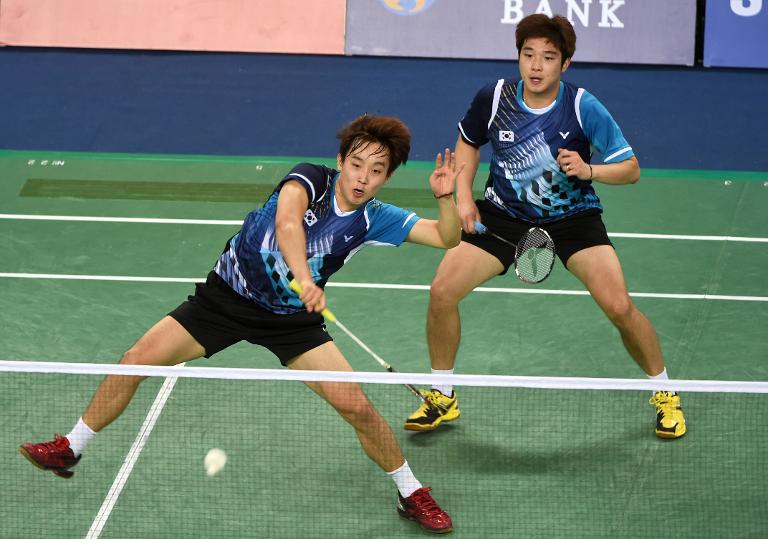 China’s world champion Chen Long fell to a storming performance by Son Wan-Ho in the opening match of an intense five-hour battle, which ended with South Korea winning 3-2.

But it was former Asian Games men’s team gold medallist Lee, 34, who closed the deal after being brought out of retirement to bolster the team’s singles.

He took down Gao Huan, 10 years his junior, in the fifth match decider, striding to a 2-0 win before his teammates ran onto court bundling on top of him and throwing him in the air in celebration.

Lee has repeatedly retired from the game only to be brought back for team events. His last retirement was following the 2012 Olympics where he lost to Chen for bronze.

Tuesday was his second Asian Games gold after helping the men’s team to victory in 2002 — the last time the team took top spot.

Despite the age difference, Lee dominated, matching Gao for ability and speed although he had the home crowd screaming in agony after sending shots long and into the net to allow Gao back into the second game.

“I’m very proud of winning a gold medal with my younger teammates. I just came back for this Asian Games because the national team asked me — I was still playing at club level and will retire from badminton completely in a few years so it’s great to win here.”

Teammate Lee Yong-Dae said: “We’ve been in second place many times to the Chinese and we’re so happy to get a gold in Korea — tonight we’ll enjoy it.

“I feel like this is going to be my last Asian Games, so I want to do well.”

In the opening match, Son defeated clear favourite Chen in three games — having won only one of their six previous meetings.

In a bizarre first game Chen was outgunned, only putting five points on the board but turned up the aggression in the second, in the best game of the tournament so far.

Chanting from the stands was deafening as the players unleashed body shots and smashes, then switching to net face-offs which were so fast that the shuttle was barely perceptible.

Chen took the game 24-22 but the Korean was not to be denied in the third, with leaping smashes leaving the Chinese star defeated 21-14.

“I just focussed on the third and went on the attack after the break,” said Son, who finishes his compulsory military service today and dedicated the win to his fellow soldiers.

Players have complained that the air conditioning in the stadium is too strong and both Chen and Son said it was harder to play at one end than the other, but Chen conceded that he was fairly beaten.

“I didn’t play well when the wind was behind me, but frankly he played better than I did — there were very few chances for me.”

Korean doubles pair Kim Gi-Jung and Kim Sa-Rang fell 2-1 in the fourth, so it was left to Lee to dispatch Gao and start yet another phase in his long career.