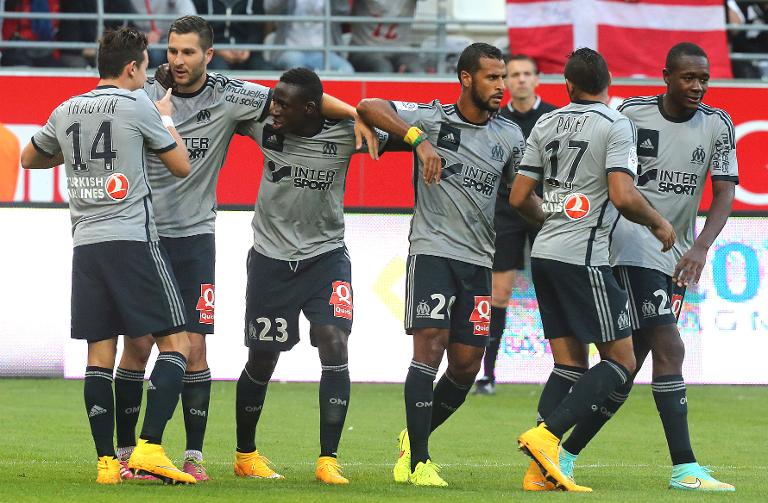 High-flying Marseille picked up their fifth straight victory on Tuesday as Ligue 1 top scorer Andre-Pierre Gignac claimed a brace in a 5-0 thrashing of Reims.

Gignac could even afford the luxury of a missed eighth-minute penalty, before scoring two first-half goals while Ghana international Andre Ayew also struck twice in a one-sided affair at the Stade Auguste Delaune.

The win takes Marcelo Bielsa’s in-form side three points clear at the top of the French table ahead of a busy Wednesday slate, before Saint-Etienne host Bordeaux on Thursday with both teams currently tied for second.

“It’s very satisfying to get five wins in a row and we did it in style as well,” said Gignac, who also scored twice in the 3-0 win over Rennes at the weekend.

“Obviously it’s been a good day and now we can look forward to a big match against Saint-Etienne on Sunday.

“We want to keep things going and go on to have a great season.” added Gignac.

Gignac, who was left out of Didier Deschamps’ World Cup team that reached the quarter-finals in Brazil, gave the national coach food for thought as he took his tally to eight goals in seven matches.

France are preparing to host Euro 2016 and qualify automatically but have preparation matches against Portugal on October 11 before facing Armenia three days later.

French-born Ayew, who helped Ghana finish runners-up to Egypt at the 2010 African Championships, put the result beyond doubt seven minutes after half-time, before an audacious back-heeled goal on the hour mark added further gloss.

Marseille, who won the last of their nine French titles in 2010 under Deschamps, put the icing on the cake with 16 minutes remaining when Gianelli Imbula celebrated a rare goal much to the delight of the travelling faithful.

“It’s a fair result because we were serious and played in the way we wanted too,” said Bielsa.

“Despite the result, we sacrificed a lot against an opponent who never lost their attitude and didn’t give up.”

“It was a really great match, we were superiour but also consistent and advancing. We attacked well and defended well and a big result like this will give us confidence,” continued the Argentine.

“Of course it’s too early to talk about the title and we just have to keep going in this way without jumping to conclusions about the title. We will know that at the end of the season.” he added.

Reims remain on seven points, with two wins from seven outings, and lie just one point above the relegation zone.

In Tuesday’s late match, Toulouse picked up their first away win of the season by beating Rennes 3-0.

The win takes the southern-based club up to seventh place in the table while Rennes slip to ninth.

Defending champions Paris Saint-Germain are now five points adrift, and will be without injured striker Zlatan Ibrahimovic for their trip to Caen on Wednesday, while fourth-placed Lille travel to fourth-from-bottom Nice.