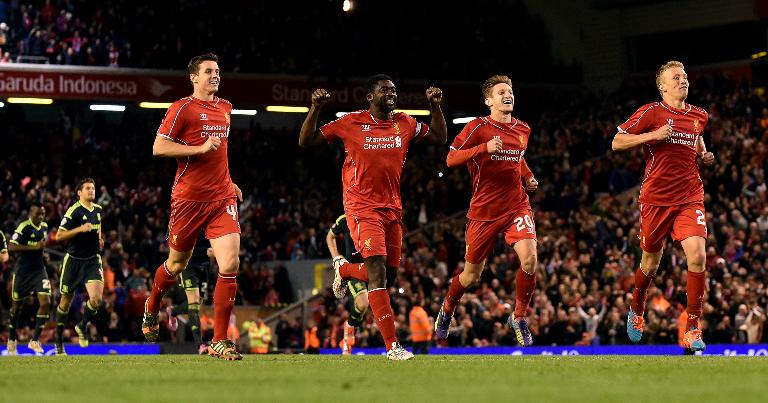 Liverpool reached the English League Cup last 16 after an extraordinary third round tie saw them beat second-tier Middlesbrough 14-13 in a penalty shoot-out on Tuesday, while Southampton knocked Arsenal out of the competition.

Both goalkeepers scored in a shoot-out at Anfield where all 22 players still on the field took spot-kicks before Middlesbrough’s Albert Adomah fired wide to ensure eight-times League Cup winners Liverpool’s victory.

Earlier, 17-year-old striker Jordan Rossiter marked his Liverpool debut with a 10th-minute goal before Adam Reach equalised for Middlesbrough just after the hour.

All square after 90 minutes, it substitute Suso had done enough to give the hosts victory with a 109th-minute goal that made it 2-1.

But with virtually the last kick of extra-time, Boro’s Patrick Bamford scored from the penalty spot to make it 2-2 after being brought down by Kolo Toure in the box.

In the shoot-out that followed, Bamford saw his effort saved early on before Liverpool’s Raheem Sterling also failed to score.

The match then moved into sudden-death and the tie wasn’t settled until Adomah missed with the 30th penalty of a remarkable shoot-out.

For record eight-times League Cup winners Liverpool, this was a badly-needed victory after their 3-1 league loss to West Ham and set them up for this weekend’s Merseyside derby with Everton.

“It was very important to get a result and the players are very happy in the changing room,” said Liverpool manager Brendan Rodgers.

“We’re in the hat and that’s all we want. This won’t affect us for the derby with Everton at the weekend. That’s a big game for us, we need to get our league season up and running.”

Boro manager Aitor Karanka said of his side: “I don’t have the words to say to tell them ‘thank you’ as they were brilliant, and everything was brilliant up until the last penalty.”

– Saints march on against Arsenal –

Earlier, Southampton — second in the Premier League — came from behind to win 2-1 away to top-flight rivals Arsenal at the Emirates Stadium.

Arsenal manager Arsene Wenger made 10 changes to the side that beat Aston Villa 3-0 in the Premier League last weekend but when Alexis Sanchez put the Gunners 1-0 up with a superb 14th-minute free-kick, it seemed the home side were on their way to victory.

But the Gunners, with Saints old boy Calum Chambers the sole survivor from the Villa victory, were pegged back by Dusan Tadic’s penalty six minutes later.

Southampton’s Nathaniel Clyne then scored what turned out to be the winning goal with a blockbuster 35-yard strike five minutes before half-time.

“When you look at the amount of possession we had, we have to give credit to Southampton, they played well and were well organised,” said Wenger.

For Southampton, who saw manager Mauricio Pochettino and several first-choice players leave in pre-season, this was their fifth successive win in all competitions under Dutch boss Ronald Koeman.

“I’m very proud, because winning away against Arsenal, that means a lot,” said Koeman. “Everybody spoke about the changes of the Arsenal team. I think they made some changes but they took it very seriously.

“I enjoyed tonight, not only for the result finally, but the way we played.”

Nathan Dyer scored just before the half-hour mark before Gylfi Sigurdsson made it 2-0 in the 65th minute.

Marvin Emnes added a third in the closing minutes as Welsh club Swansea beat Everton for the first time in their history.

“The scoreline reflects that Swansea were very clinical and we weren’t,” said Everton boss Roberto Martinez, a former Swansea manager.