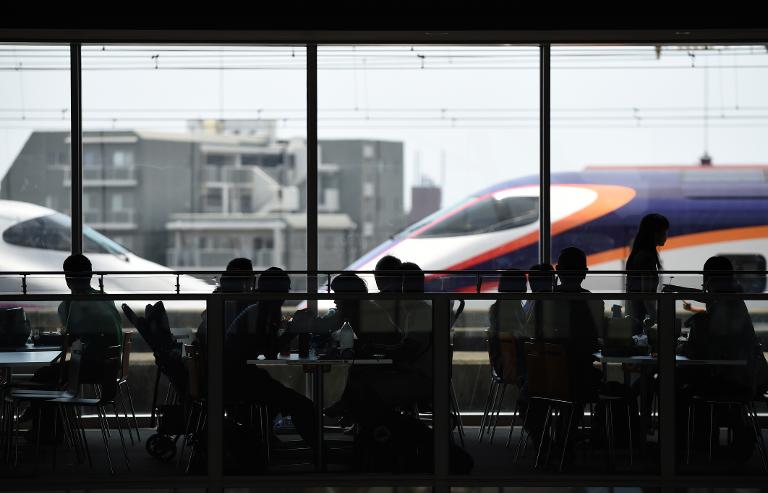 Fifty years ago, the first bullet train pulled out of Tokyo station and hurtled across the countryside, heralding Japan’s arrival as a modern economic powerhouse with a transport system soon to become the envy of the world.

Less than two decades after a bitter World War II defeat that left much of the country in ruins, Japan was at the cutting edge with its sleek, airplane-shaped “shinkansen” that glided over great distances of newly-laid track.

“With the start of the shinkansen, we had a feeling that the starving time would end and Japan would change dramatically,” recalled Fumihiro Araki, a former railway engineer.

“The shinkansen aimed to be the world’s fastest train; it gave people hope and made Japan look forward,” said 73-year-old Araki, now deputy director at the Railway Museum in Omiya, north of Tokyo, where the first engine — named “Hikari” (light) — is housed.

“It was nicknamed the ‘superexpress of dreams’ and actually gave Japanese people a dream,” he added.

The bullet train unveiled on October 1, 1964 was the centrepiece of Japan’s coming out party, which would begin in earnest a week later with the Tokyo Olympics. It proved Japan had caught up with — and even surpassed — other developed countries.

Never mind that its construction had lumbered Japan with huge debts as its runaway budget spiralled out of control, or that public opposition to the project had been fierce.

– Celebrated blend of old and new –

The shinkansen connected Japan’s two major urban centres, Tokyo and Osaka, by way of 66 tunnels and 96 bridges at speeds of up to 210 kilometres (130 miles) an hour, shortening travel times by a whopping two and a half hours.

That meant a businessman could travel from Tokyo to Osaka and back again in a day. It also lassoed both urban centres for people who wanted to go to concerts or to go shopping in the new consumer economy.

It also brought top tourist spots like the ancient capital of Kyoto much closer, and allowed passengers a majestic view of Mount Fuji as the gleaming new train sped past, simultaneously giving Japan the picture that sums up its celebrated blend of old and new.

“The shinkansen helped enhance Japan’s economic competitiveness by accelerating the concentration of population and industries in Tokyo,” said Osuke Itazaki, a senior analyst at SMBC Nikko Securities in Tokyo.

It was also credited with “boosting mobilisation of people around the country, and it is still playing that role,” said Itazaki.

The network expanded over the following decades to connect more parts of the mountainous country, and now covers all major population centres on the main island of Honshu and the southern island of Kyushu.

Despite running in an earthquake-prone country, none of the 324 million annual passengers — who travel at speeds of up to 320 kilometres (200 miles) an hour — has ever died because of a shinkansen derailment or collision, although people have committed suicide by jumping in front of the trains.

The system has almost legendary punctuality rates with the average delay considerably less than a minute.

Today, bullet trains leave Tokyo for Osaka up to every three minutes and travel the 515 kilometres in two hours and 33 minutes.

Fifty years after its inception, the shinkansen is no longer unique — several countries, including China, now have high speed train networks. Whether Japan can ever regain its crown remains to be seen.

Ultra speedy magnetic levitation — maglev — trains, which hover 10 centimetres (4 inches) above the tracks and are propelled by magnets, are in development, with a proven top speed of 581 kilometres per hour on a test track.

The plan is to launch maglev services between Tokyo and the central city of Nagoya by 2027. By 2045 they are expected to link Tokyo and Osaka in just one hour and seven minutes, less than half the current time.

But there are doubts the scheme will ever come to pass. The costs are astronomical — estimated at nearly $100 billion just for the stretch to Nagoya, with more than 80 percent of the route expected to go through costly tunnels.

Analysts question whether a shrinking and ageing Japan can really afford to saddle itself with a project this big, even with such an elongated time frame.

The 127 million-strong population, of whom around a quarter are 65 or over, is expected to shrink to 86 million over the next forty years, with four in ten people expected to be elderly in the coming decades.

“I don’t expect Japanese people’s overall demand for travel will increase radically even once the maglev starts operating,” said Takaji Suzuki, an expert in transportation systems and economy at Nagoya-based Chukyo University.

The maglev project was probably given the go-ahead because the shinkansen to Osaka is ageing and will need to be refurbished at some point, he said.

“When you think of Japan’s demographic transition and balance, it’s true that the company going ahead with constructing the (maglev) system is not in an optimistic situation,” said Suzuki.