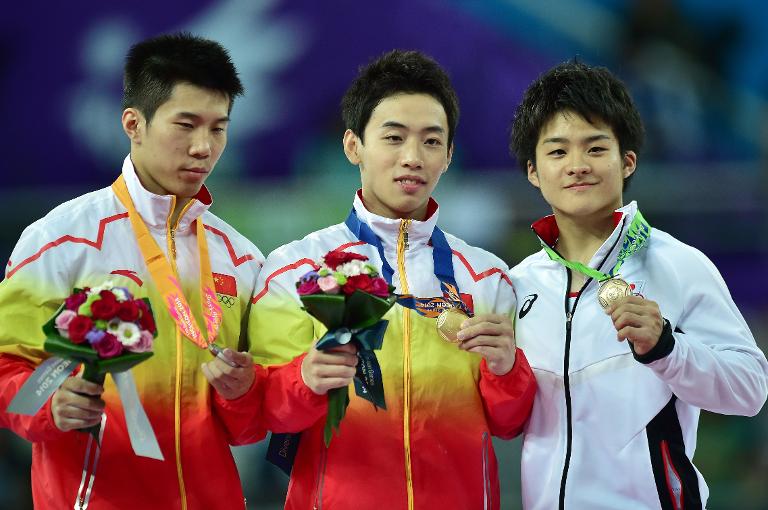 China, the traditional powerhouse in Asian gymnastics, have made a poor start in the men’s division, slipping to third in the team competition and not even making the podium in the individual all-round event.

Five-time Olympic gold medallist Zou, 26, went some way to making amends on the floor, surviving a couple of slight early stumbles to score 15.533 with the most difficult routine of the night.

Liao Junlin added another men’s gold for China on the rings while for the women, Yao Jinnan added an uneven bars gold to her victory in the all-round event on Tuesday, forcing world champion Huang Huidan into second place.

There was gold for North Korea in the women’s vault as Hong Un-Jong turned in a dazzling pair of runs to beat Uzbek veteran Oksana Chusovitina into silver in a rerun of the 2008 Olympic final.

Hong, cheered loudly by a small but vocal band of North Korean athletes and officials, attacked the vault with power and grace and executed her dismounts with wonderful precision.

On a busy night at the Namdong Gymnasium — close to capacity after a disappointing turnout in the earlier rounds — Japan’s Masayoshi Yamamoto took gold on the pommel horse, ahead of Uzbek teenager Abdulla Azimov.

Zou, China’s most decorated Olympian, looked glum as he waited for his score to be announced and afterwards said he felt he was well off the magnificent standard he set at the 2012 Olympics.

“I’m not 100 percent satisfied with my performance on the floor,” he said. “I’m not in the best condition compared with when I was competing in London.”

Team-mate Huang Yuguo, who only managed fourth in the individual all-round, made it a Chinese one-two with a score of 15.300.

Japan’s Yuya Kamoto, fresh from his gold medal in Tuesday’s all-round, turned in another tight routine to take bronze on 14.933.

South Korean Shin Dong-Hyen delighted the crowd with a superbly performed routine — the only one to score 9.0 for execution — to raise hopes of a home medal. But Kamato pipped him with the last routine of the night.

Perhaps the most courageous performance of the night came from India’s Commonwealth Games bronze medallist Dipa Karmakar in the women’s vault.

Competing with her ankle heavily strapped after landing badly in qualifying while trying an exceptionally difficult forward tumbling dismount, she attempted the same vault again, only to land heavily once again and place fourth.