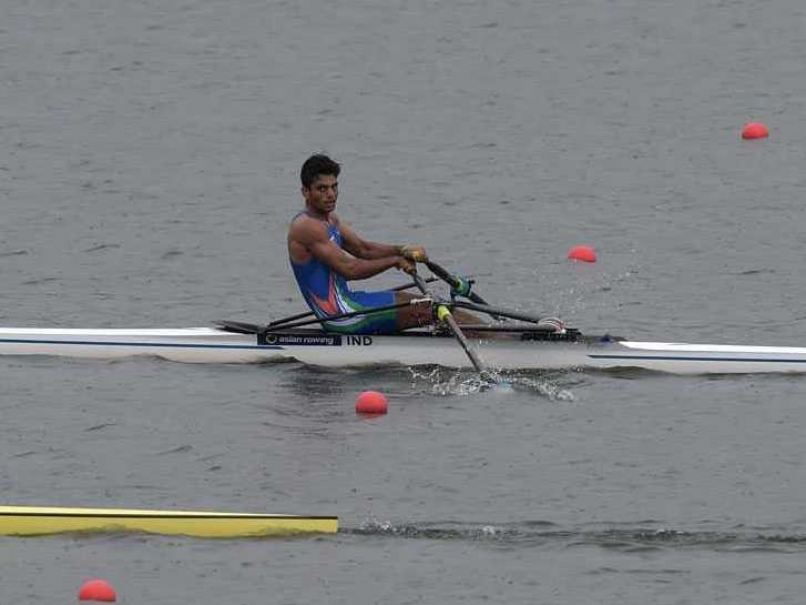 Incheon: Rower Dushyant Chauhan was the lone bright spot after the shooters drew a blank as India managed just one bronze medal to slip to the 14th position in overall standings on the fifth day of competitions in the 17th Asian Games in Incheon on Wednesday.

Dushyant was the only athlete to manage a podium finish as he grabbed a bronze in the menâ€™s lightweight single sculls event on what turned out to be a mixed day for the Indian contingent.

The strong shooting squad, which had accounted for the bulk of medal collection so far, drew a blank on Wednesday which led to India dropping one place in the medal table.

The badminton and squash teams had a good day in their respective matches but the womenâ€™s hockey team lost 1-2 to China in a preliminary match.

Earlier on the day, Dushyant, hailing from Haryana and belonging to the Bengal Engineering Group in Roorkie, led from the 500m till the last 200m in the 2000m race before strong northerly winds and rain put paid to his gold medal hopes as he fell behind two others and finished third by clocking 7:26.57.

Chauhan was second behind gold-medallist Lok Kwan Hai by just under two seconds in the first 500m and then caught up with his rival before overtaking him in the course of the next 500m and looked assured of a gold before inclement weather hampered his chances.

He not only lost the gold medal, but also the silver as the host countryâ€™s Lee Hakbeom, who was third with 500m left, also surged past the Indian rower to clinch the second spot in 7:25.95.

It was the first medal of the day after a fruitless stint at the shooting range for India and the 10th bronze in the Games.

After scooping six medals, including a Gold won by Jitu Rai, on the first four days of the Asian Games, Indian shooters misfired at the Ongnyeon pistol and rifle range.

India had chances of winning four medals from the 25m rapid fire pistol event for men and the 50m rifle prone for women but could not get even one on a disappointing day.

Indian menâ€™s 25m rapid fire pistol team narrowly missed out on a bronze as they finished fourth after ending up with same points as Vietnam with a tally of 1704. The bronze was decided on â€˜innner 10â€™ count and Vietnam bagged the medal as they had 41 hits at the innermost ring as against 39 by the Indians.

Indiaâ€™s chances of a medal in the individual event rested on Harpreet Singh but he failed to even qualify for the final round finishing seventh.

Harpreetâ€™s teammates Gurpreet Singh and Pemba Tamang performed poorly to end up 12th and 20th with respective overall tallies of 570 and 556.

The Indian women were even more off the mark with army major Raj Chaudhary, the main hope, starting well in the 50m rifle prone individual event before tapering off to finish 22nd out of 43 shooters with an aggregate score of 614.6.

The Indian women finished outside the medal bracket in the 50m rifle prone team event too, ending up 11th out of 13 countries with an aggregate of 1837.1.

Elsewhere, after guiding the womenâ€™s badminton team to a historic bronze two days ago, Indiaâ€™s top shuttlers Saina Nehwal and P V Sindhu opened their campaign in the individual competitions with thumping victories.

Sixth seed Saina easily overcame U Teng Lok of Macau 21-10, 21-8 in just 20 minutes and lined up against her next opponent Iranâ€™s Soraya Aghaeihajiagha, who dispatched Mongoliaâ€™s Khulangoo Baatar in straight games in another round of 32 womenâ€™s singles encounter.

Sindhu, seeded 8th, too had a comfortable 21-7, 21-13 first round victory in 19 minutes over Wong Kit Leng, also of Macau, to book a round of 16 clash against M Bellaetrix of Indonesia, a contest the lanky Hyderabadi described as â€œtrickyâ€.

In squash, India took a big step towards winning another medal after the womenâ€™s team, including Joshana Chinappa and Dipika Pallikal, upset Hong Kong 2-1 in its opening match.

Varsha and Aishwarya were on top of the heap of six teams in the 12-race event which will continue till September 30.

However, the Indian menâ€™s basketball team crashed out after losing to Iran in a preliminary round match. The Indian team lost 41-76, their second consecutive defeat in preliminary round Group E, to make an exit from the tournament.

On the tennis court, Natasha Palha crashed out of the womenâ€™s singles event following a straight sets defeat but the combo of Shweta Rana and Rishika Sunkara made a bright start for India in womenâ€™s doubles, recording an easy win over Pakistanâ€™s Sara Mansoor and Ushna Suhail.

There was disappointment in sepaktakraw as both the Indian menâ€™s and womenâ€™s teams suffered their second consecutive defeats leaving them with little chance of advancing to the next round.

Both the menâ€™s and womenâ€™s teams suffered an identical 0-3 thrashing at the hands of defending champions Thailand in the preliminary round matches at the Bucheon Gymnasium Court here.

However, the Indian menâ€™s volleyball team hardly broke a sweat as it thrashed unfancied Maldives 25-10 25-19 25-17 in exactly an hour to enter the quarter-final.