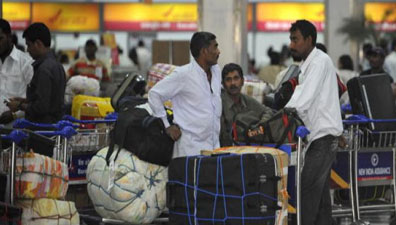 New Delhi: Air India has been asked by a consumer forum here to pay compensation to a man, who lost his baggage at airport, saying the airline caused “extreme mental agony” due to its “deficiency in action and gross negligence”.

“This is a very serious matter. In case of public sector unit, it would show that laid down procedures and guidelines have not been followed by Air India authority,” the forum said.

The forum said it was a fit case for punitive damages so that the public sector unit shall be sensitive to difficulties faced by innocent passengers.

“We impose a punitive compensation of Rs one lakh out of which Rs 50,000 to be paid in the Consumer Welfare Fund and Rs 50,000 to complainant for extreme mental agony, humiliation, inconveniences, loss of baggage due to negligence, physical discomfort and litigation expenses,” it said.

Sharma had told the forum that on December 30, 2010, he left one of his bags during journey at airport due to oversight.

However, he went back on the same day and approached the enquiry desk of Air India and examined CCTV footage, which revealed that the bag was picked up by one loader staff, working with a private firm which had a contract with airline.

Later, he filed a formal complaint with the IGI Airport.

He claimed the airline, Airport Authority of India and Delhi International Airport Ltd were shifting blame on each other and subsequently, an FIR was registered in March 2011 but Air India continued giving evasive reply.

Police, after its investigation, submitted the untraceable report and an Additional Chief Metropolitan Magistrate (ACMM), passed a closure order on December 13, 2012. Aggrieved by this, Sharma approached the forum.

The Air India told in its reply that it was unable to carry out investigation as the loss was reported to it very late.

However, it admitted that the staff, who was seen picking up the bag in the CCTV footage, was employed as a loader with a firm which had contractual relations with it. The airline added he had stopped reporting from work since February 22, 2011.

In its written arguments, Air India declined to accept the responsibility of baggage as being left unattended on Airport Terminal.

“…Deficiency in action and gross negligence on part of Opposite Party 1 (Air India) is clearly established, whereby complainant, a respectable citizen, is made to suffer and run from one department to another without getting any respite,” it said.

On airlines’ submission that matter was reported too late for investigation, forum said it did not have any credence as Sharma approached it on day of loss itself and thereafter a formal complaint was lodged with IGI Airport on next date.

It added it was for the Air India to explain as how false and incomplete affidavit escaped notice at all levels.