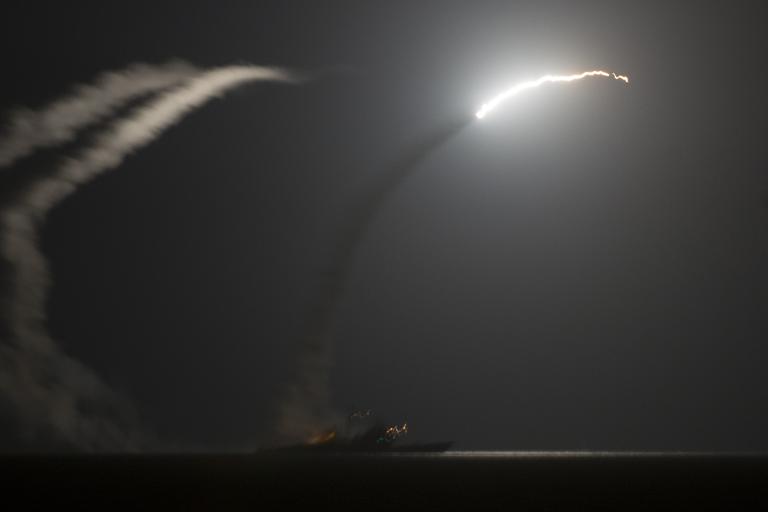 The US-led coalition launched strikes against Islamic State militants besieging a Kurdish town in Syria as world leaders prepared for talks on Wednesday at the UN on battling the jihadists.

The overnight raids targeted Islamic State (IS) group fighters whose fierce assault in the area prompted more than 130,000 civilians to flee across the border into Turkey.

They followed the first strikes by Washington and its Arab allies on Tuesday against IS in other parts of Syria in which at least 120 IS and Al-Qaeda militants were said to have been killed.

Washington said those raids had partly targeted extremists plotting an “imminent attack” against the West.

The US-led campaign — in which Saudi Arabia, Bahrain, the United Arab Emirates, Qatar and Jordan participated — was set to take centre stage at the United Nations later Wednesday.

US President Barack Obama, who hailed the strikes as a sign the world is united in confronting the jihadists, will be among the first leaders to address the General Assembly in New York.

He then chairs a special UN Security Council meeting due to adopt a resolution on stemming the flow of foreign fighters to Iraq and Syria, only the second time the US president leads a session of the top world body.

The US-drafted resolution calls on all countries to “prevent and suppress” recruitment and all forms of assistance to foreign fighters, and would make it illegal to collect funds or help organise their travel.

About 12,000 foreign fighters have travelled to Syria and Iraq from 74 countries, in the biggest such mobilisation since the Afghan war of the 1980s, according to the London-based International Centre for the Study of Radicalisation.

The overwhelming majority of foreign fighters — up to 75 percent — are from the Middle East and Arab countries, with Saudi Arabia, Tunisia and Morocco topping the list.

Branded a terrorist organisation by the United States and the United Nations, IS controls large swaths of territory in Iraq and Syria, and has beheaded two US journalists and a British aid worker.

The raids on Tuesday were also believed to have killed a group of Al-Qaeda “veterans” — known as Khorasan — plotting to attack US and Western interests, the Pentagon said.

The Syrian Observatory for Human Rights said at least 50 Al-Qaeda militants were killed, as well as more than 70 IS members. Eight civilians, including three children, were also among the dead.

Syrian state media said the latest coalition raids struck near the Kurdish town of Ain al-Arab, or Kobane, which the Islamic State group has been battling to capture for a week.

The strikes also targeted an IS base in Albu Kamal on the Iraqi border, state news agency SANA reported.

US aircraft have carried out more than 190 air strikes against the jihadist group in Iraq since August 8. Most of them were in the north, in support of Kurdish forces.

Obama declared that “the strength of this coalition makes it clear to the world that this is not America’s fight alone”.

“It must be clear to anyone who would plot against America and try to do Americans harm that we will not tolerate safe havens for terrorists who threaten our people,” he added.

The Pentagon said Tuesday that “very successful” strikes had hit IS positions, training compounds, command centres and armed vehicles in the IS stronghold of Raqa and near the Iraqi border.

US Secretary of State John Kerry said NATO member Turkey, a neighbour of Syria, had pledged to join the campaign, which IS militants have warned they will avenge.

But Turkey denied reports from activists Wednesday that coalition planes had entered Syria from its airspace.

Algerian extremists have threatened to kill a French hostage unless Paris halts air raids in Iraq — a demand rejected by President Francois Hollande.

Dutch F-16 fighter bombers are to join the US-led air campaign in Iraq, Dutch media reported Wednesday ahead of an emergency cabinet meeting.

Britain’s press meanwhile reported that an emergency recall of Britain’s parliament to decide whether to join the strikes in Iraq could take place as early as Friday.