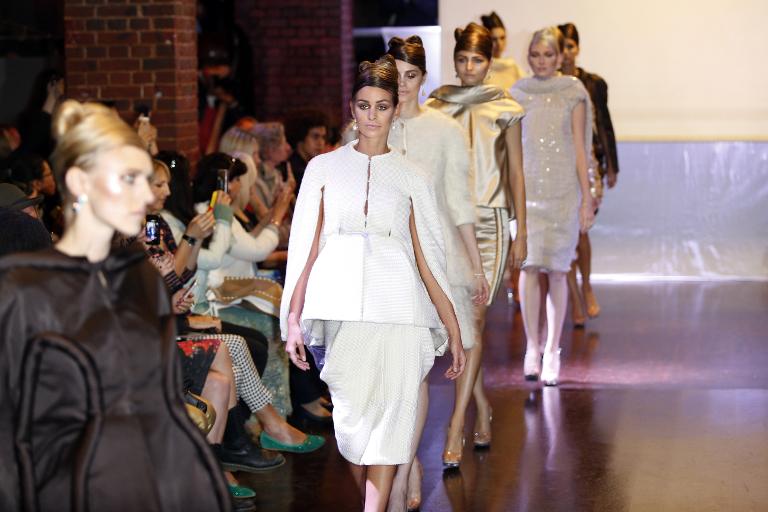 Nine days of Paris fashion got off to a retro start with a 1960s-inspired collection from Corrie Nielsen featuring beehive hair and Mad Men-style looks with futuristic, voluminous twists.

Citing 1960s icons Brigitte Bardot and Jane Birkin as influences, Nielsen dedicated the collection to “the women of the 1960s who shaped and influenced the world as we see it,” including her late mother.

London-based Nielsen said her “Single Girl” ready-to-wear collection was all about a “strong independent and active woman, whilst remaining true to her simultaneous delicacy, adolescence and slenderness”.

Slimline skirts and dresses plus tweedy-looking two-piece suits with soft, rounded shoulders conjured up the feel of the Mad Men television series in its 1960s phase.

Among the less wearable looks, however, was an entirely transparent dress with nothing more to it than the skimpiest of knickers and a series of futuristic circular padded strips in place of the skirt.

Elsewhere on Tuesday, Pascal Millet was sporty and relaxed with his “Miami Twist” collection.

For day there were girlish gingham cotton dresses and fluid printed silk ensembles.

For evening the designer went for flowing leather and cotton tulle dresses with transparent skirts worn over tiny shorts.

Millet teamed them with what he called “oh so Palm Beach” tuxedo jackets “to dance all night long in the Miami Beach clubs”.

The shows were among the first of over 90 to be held over the next nine days, the highlight of which will be Jean Paul Gaultier’s last ready-to-wear show before he stops to concentrate on couture.

Speaking backstage, Nielsen told reporters she had “huge respect” for the flamboyant designer and would be very sad to see him go.

“He’s had an incredible career. I mean incredible. He’s been a huge inspiration to myself and I wish him all the luck,” she said.

The 62-year-old showman of the catwalks is bowing out of ready-to-wear after nearly four decades.

The designer has said the decision was taken after an “in-depth assessment” of his eponymous fashion house’s future with Spanish fragrance and fashion group Puig, which has a majority stake.

Gaultier’s last ready-to-wear show will be held on Saturday and is fashion week’s must-have ticket.

“Everyone will want to be there and I think it’s certainly going to be a very moving moment,” said Stephane Wargnier, new executive president of the French Federation of Couture.

Other highlights will be first collections by Georgia’s David Koma for Mugler and France’s Julie de Libran for Sonia Rykiel.

In recent years Gaultier, considered one of France’s most talented designers, has been the subject of a major retrospective by the Museum of Fine Arts in Montreal.

Since 2011, the exhibition has been seen by a million visitors worldwide and is due to arrive in Paris in 2015.

One room in the exhibition is devoted to “Eurotrash”, the outlandish adult television show hosted by Gaultier and Antoine de Caunes on Britain’s Channel 4 during the 1990s.

The designer said earlier this month that “commercial constraints as well as the frenetic pace of collections” had left him little freedom to explore fresh ideas and innovate.

“The pace is harder than in the past, retail demands several deliveries per season, so we are no longer in an era when one calmly does a collection every six months,” Wargnier said.

“It’s the way it is in fashion now and everyone adapts in their own way,” he added.