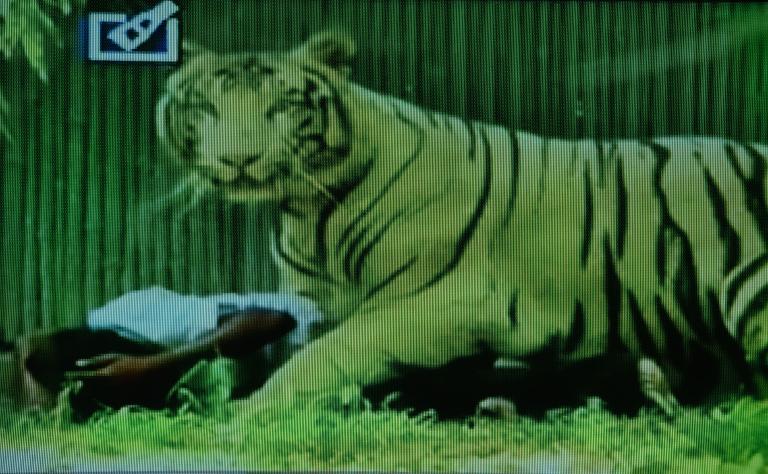 A white tiger on Tuesday attacked and killed a youth who appeared to have jumped or fallen into its enclosure at a zoo in the Indian capital, witnesses said.

The tiger grabbed the youth by the neck after he entered the enclosure at the New Delhi zoo as onlookers screamed and threw sticks and stones to try to save him, they said.

“The boy seems to have leapt over the railing into the tiger enclosure. It was a white tiger that attacked,” New Delhi zoo manager Riaz Khan told AFP.

“We are trying to find out who this boy was and why he did what he did. The police are here and they are investigating.”

Accounts varied of the victim’s age, with some witnesses saying he was in his mid-teens while others saying he appeared to be in his 20s.

One official said he also appeared to have been “under the influence of alcohol”.

“The security had tried to keep him away from the enclosure but he somehow managed to jump in and the white tiger who was present at the enclosure leapt on to him,” junior official Rohit Kumar told AFP.

“This is the first time such an incident has occurred in this enclosure.”

Photos posted online of the attack show the tiger standing over the victim, who was lying on the grass curled into a ball and trying to protect his head with his hands.

A witness said he raced to the enclosure after hearing screams, to see the victim locked in the tiger’s jaws, “writhing badly in pain”.

“Around 1.30 pm, when we were in the reptiles area, we heard very loud screams,” Himanshu, who only gave one name, told CNN-IBN news channel.

“We saw some kids throwing in small sticks and stones inside the tiger enclosure.”

“Then we saw that a white tiger had caught a boy by his neck and he was writhing badly in pain.

“He kept suffering for the next 10-15 minutes but nobody helped him.”

Himanshu said the railing of the tiger enclosure was “very low” and speculated that the victim may have fallen in.

“I called the police, the police came very quickly, but the guy couldn’t be saved, he died.”

The victim’s body was lying in a corner of the enclosure, drapped in a white sheet, while the tiger had been removed, an AFP reporter said.

The enclosure is separated from visitors by a concrete ditch, with shrubs on the other side of the ditch followed by a two-foot-high (61-centimetre) railing.

Another witness said the tiger kept “roaming around” the enclosure, holding the victim by the neck.

“The tiger first caught his neck and then left him before coming back again and taking him to the other side (of the enclosure) by his neck,” Bitto, who only gave one name, told TV networks.

The zoo has three white tigers, although only one of them is let out into the enclosure daily for visitors to see, a zoo official said.

White tigers are found in southern and eastern Asia, particularly India, and owe their appearance to a recessive gene. They are regarded as an endangered species.

India is home to 1,706 Royal Bengal tigers and fewer than 100 white tigers, according to the last census in 2011. All the white tigers are in captivity.

Rampant poaching and loss of habitat due to human encroachment are cited as the major challenges to tiger conservation efforts.