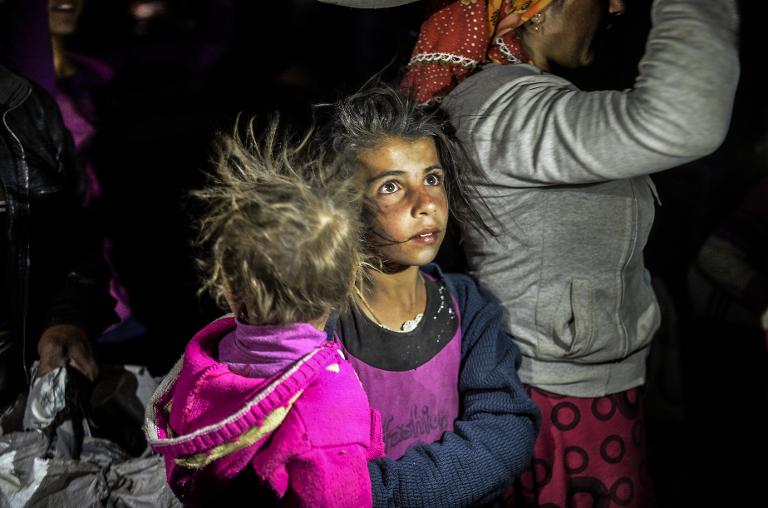 Kurdish militia fought to defend a key border town in northern Syria on Monday after 130,000 terrified residents fled to Turkey to escape an advance by the Islamic State group.

Amid calls for a US-led coalition to support the Kurds with warplanes, jihadists threatened to execute a Frenchman kidnapped Sunday in Algeria unless France halts it air strikes.

News of his capture, which was confirmed by the French government, came on Monday after IS issued a statement urging Muslims to kill Westerners whose nations have joined the campaign.

France is the only country to have joined the US air strikes against the IS in Iraq, where it emerged Monday that the jihadists attacked an army base west of Baghdad with six suicide bombers at the weekend, killing 40 soldiers and capturing at least 70.

Pressure also mounted on Turkey, where security forces clashed with locals angry at being blocked from joining fellow Kurds battling an IS advance towards Ain al-Arab, or Kobane, Syria’s third largest Kurdish town.

The IS fighters have seized dozens of villages and — amid reports of executions and other atrocities — tens of thousands of refugees have fled into Turkey.

Turkish officials said Monday the number of arrivals had reached 130,000 and more were expected, but after days of losing ground, Kurdish forces appeared to have slowed the jihadists.

IS aims to seize Ain al-Arab to secure its grip over a long stretch of Syria’s northern border with Turkey.

It has battled Kurdish forces in northern and western Syria, viewing the minority as apostates, even though they are also Sunni Muslims, because of their secular outlook.

The Observatory said Monday the jihadists had seized at least 64 villages around Ain al-Arab and executed at least 16 Kurds.

The PKK Kurdish rebel group in Turkey has called on Kurds to cross into Syria to help in the battle, but Turkish officials have tightly controlled the border.

After an initial flood at the weekend when guards cut barbed wire on the border, Ankara has limited entries to only three crossings and prevented some from going into Syria.

For a second day, Kurdish protesters angry over the Turkish move were seen clashing near the border with security forces who again fired tear gas and used water cannon to disperse them.

Syrian opposition officials and Kurdish activists have called for international intervention by the US-led coalition assembled to fight IS.

Washington has said it would consider strikes against IS in Syria, even without permission from Damascus, but its UN envoy said Sunday “no decisions” had been taken.

More than 50 countries have signed up to the anti-IS coalition, including Australia, whose foreign minister said in Baghdad that Canberra was preparing to send warplanes to help in the aerial campaign.

The IS group has seized large parts of Syria and Iraq, declared an Islamic “caliphate” in areas under its control and committed widespread atrocities including beheadings and crucifixions.

In a statement posted online, IS spokesman Abu Mohamed al-Adnani said Muslims should seek out and kill Westerners whose countries have joined the coalition, in particular Americans and the French.

“If you can kill a disbelieving American or European… including the citizens of the countries that entered into a coalition against the Islamic State, then rely upon Allah, and kill him,” he said.

France sought to reassure its citizens after the call, with Interior Minister Bernard Cazeneuve saying: “France is not afraid… France is prepared to respond to their threat.”

IS-linked militants in Algeria, meanwhile, claimed in a video posted online that they had kidnapped a Frenchman and threatened to execute him unless Paris halts its air strikes against the jihadists within 24 hours.

Jund al-Khilifa said it carried out Sunday’s kidnapping in a mountainous region of eastern Algeria where Al-Qaeda is active.

The hostage, Herve Pierre Gourdel, white-haired and bespectacled, is shown squatting on the ground flanked by two hooded men clutching Kalashnikov assault rifles, as he asks for French President Francois Hollande to intervene.

Canada meanwhile said it was looking to scale up its fight against terrorism after the IS statement that also urged attacks on its nationals.