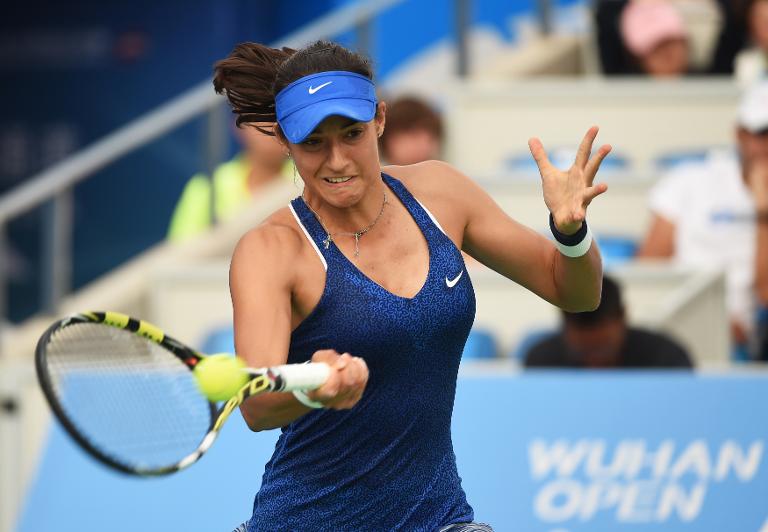 World number six Agnieszka Radwanska was dumped out of the $2.4 million WTA Wuhan Open on Monday by a determined Caroline Garcia of France, while Maria Sharapova won her first match of the inaugural tournament.

Fourth seed Russian Sharapova defeated compatriot Svetlana Kuznetsova in the evening match, while any hope of a Chinese singles victory was extinguished when US Open semi-finalist Peng Shuai crashed out to Germany’s Mona Barthel.

Radwanska was looking to book her place in the end-of-season championships in Singapore with a strong showing in Wuhan, but was defeated by a stunning fightback from Garcia, who was a set down in the second-round match.

Garcia, who had claimed the scalp of Venus Williams in the first round, took the second and third sets at the tie-break in her two hour and 42 minute duel with Radwanska.

The 20-year-old rising star, who is ranked 49th by the WTA, punched the air and jumped with delight after claiming victory.

“I knew I was still close even when I lost the first set, and that I could maybe win the second and third,” Garcia told AFP.

“I always tried to believe in it.”

Poland’s Radwanska said she still hoped to make next month’s WTA Championships in Singapore with a good performance at the China Open in Beijing, which follows the Wuhan tournament, but was reeling from her exit in Wuhan.

“Definitely I could have done better in the moments that I should have really stepped forward.”

World number four Sharapova took two hours nine minutes to dispose of Kuznetsova and take her place in the third round.

Kuznetsova, who is ranked 25th, claimed the opening set 6-3, but Sharapova then took command, winning the remaining sets 6-2, 6-2.

“I was very happy with the way I played the second and third set,” Sharapova said.

“I wasn’t waiting for her to give me the match. I really stepped up, and that was really important.”

Meanwhile, Peng Shuai failed to reproduce the heroics which saw her reach the last four at Flushing Meadows.

After losing the fist set to Barthel 6-2, the 28-year-old staged a brief fightback midway through the second set, only for the German to force a tie-break which she comfortably won.

Her loss means no Chinese player made it through the first round of the tournament, which is held in the home city of recently-retired two-time Grand Slam winner Li Na.

Elsewhere at Wuhan, Alize Cornet of France set up a meeting with world number one Serena Williams in the second round following her two-set victory over Romina Oprandi of Switzerland in her first match.

Cornet, who arrived in Wuhan with her confidence high after reaching the final at the WTA Guangzhou Open on Saturday, took the game with ease at 6-2, 6-1.

She has already beaten Williams twice this year, handing the American power-hitter her earliest defeat at Wimbledon for nine years in June, and also winning at Dubai in February.

The Italian will face Alison Riske of the USA at the next stage.

Australian world number 20 Samantha Stosur continued her miserable run of form, crashing out of her second competition in China at the first stage in a week.

The 2011 US Open winner and former world number four lost to Karolina Pliskova from the Czech Republic 6-4, 6-4 after going out early on at the WTA Guangzhou Open as top seed last Tuesday.