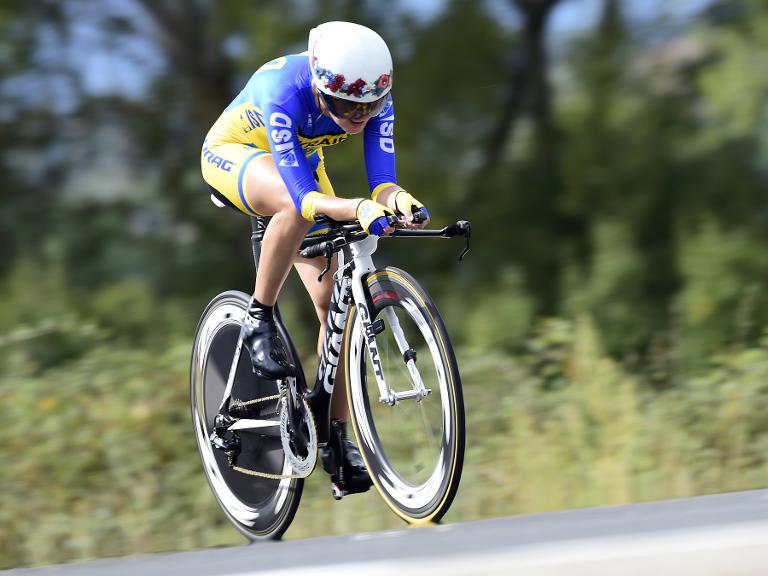 Anna Solovey may have just finished runner-up at the world time-trial championships but the Ukrainian said political turmoil back home means she doesn’t know what the future holds.

Solovey was a surprise medallist in Ponferrada, Spain on Tuesday, despite a strong pedigree that saw her win two world junior titles in the race against the clock.

The reason she had passed largely under the radar was a two-year doping ban she received at just 19 years of age that kept her out of competition from July 2011 to just before last year’s world championships.

Speaking about her performance she added: “It’s my second world championships in the elite category (she was eighth last year).

“I have a problem with my country because we have bad politics — I have a hard job. This is my first medal in the elite category and I’m so happy.”

But Solovey, 22, from the restive eastern part of Ukraine currently occupied by pro-Russian militias, said she doesn’t know what the future holds.

“I went into the world championships in a dream, I can’t say (more), I live each day.

“I come from Lugansk and this is a very dangerous city so I needed to go to another city.

“I live in Lvov (in the far west) because in Ukraine we only have one track (velodrome). I have competed in track as well.”

She said the ideal situation would be to move abroad and find a professional team but added that it would be a wrench to leave her coach Sergei Bazin, who has guided her for 10 years.

“It would be better (to leave) but I really like my country, I hope things will get better,” she added.

“It’s very difficult because I have no money from competitions. In the last year I did only one competition in France (last week).

“I can’t go (to competitions) because the Federation can’t give me money.”

With such difficulties impeding her prospects just to train, Solovey’s result seems even more remarkable, but the athlete herself claims desire is what has brought her success.

“I want it, it’s because I want it. I have the best friends, the best coach and it was my dream.

“I wanted to go to the world championships and I’m thinking about the Olympics. I have a big dream.

“In my team there are only three people, but I have the best team and the best coach.

“I don’t know anything (about joining a professional team), I can’t ask for something. I don’t know, I can’t go with any team because I need to train with my coach because it’s 10 years that I’ve been with Sergei Bazin; I can’t think what I’d do without him.”