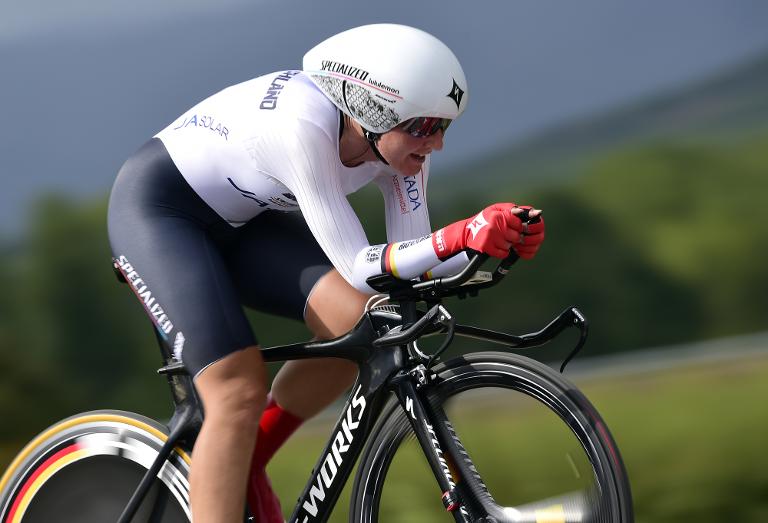 The 26-year-old, junior world champion in 2005, beat Anna Solovey of Ukraine by 18sec with American Evelyn Stevens another 3sec further back.

And she admitted it was an unexpected success.

“For me, it couldn’t have been any better so I’m very happy right now,” she said.

“I’m still surprised right now, I can’t believe it. The world championships have their own rules; sometimes there are people who you don’t see the whole year who only prepare for this one race so they’re not on your plan.

“I’m very happy and overwhelmed, it needs time for it to sink in.”

Last year’s champion Ellen van Dijk finished a disappointing seventh, more than a minute off the pace on the 29.5km course.

But the Dutchwoman, who was last to ride, was hampered in the closing stages by a torrential downpour that also affected New Zealand’s Linda Villumsen, last year’s runner-up, who could only manage ninth.

Solovey’s silver medal ensured a dramatic return to form for the 22-year-old who came back from a two-year doping suspension a year ago.

Stevens, the runner-up two years ago, made up for the disappointment of finishing fourth last year, missing out to teammate Carmen Small by just four hundredths of a second.

Earlier in the day, another German took gold as Lennard Kamna won the junior men’s event, also held over 29.5km.

His winning time of 36min 13.49sec was more than two-and-a-half minutes quicker than his compatriot’s.