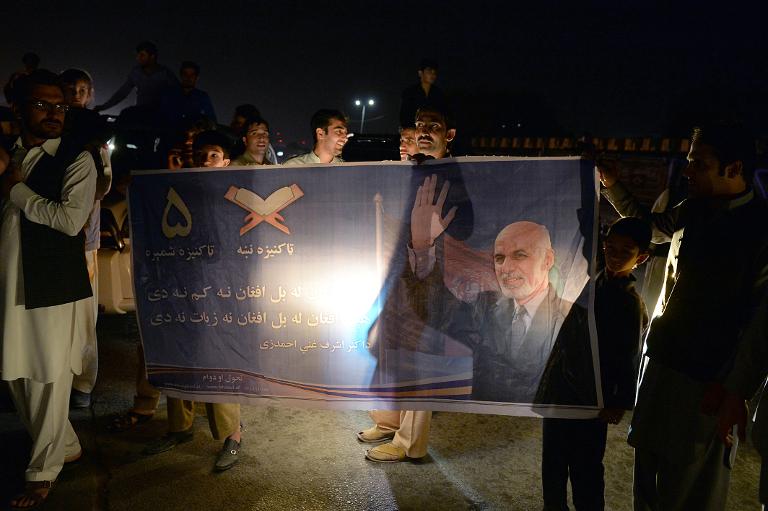 The United States has welcomed a power-sharing deal that saw former finance minister Ashraf Ghani declared Afghanistan’s next president, and said it hopes a crucial security agreement will be signed within a week.

Ghani and his rival Abdullah Abdullah struck the deal on Sunday, ending a three-month standoff over disputed elections that had paralysed the country at a key moment with US-led foreign troops winding down their 13-year war against the Taliban.

The “unity government” paves the way for a Bilateral Security Agreement (BSA) governing the presence of American troops in Afghanistan beyond 2014, which outgoing president Hamid Karzai had refused to sign.

Under the deal Abdullah will become “chief executive officer” (CEO), a role similar to prime minister — setting up a tricky balance of power.

US Secretary of State John Kerry congratulated Afghanistan for what he called a “moment of extraordinary statesmanship” in which personal interests had been put aside for the sake of the country.

The “unity government… offers a huge opportunity for progress in Afghanistan, for the signing of the BSA in a week or so”, he said.

Allegations of massive fraud in the June 14 presidential runoff vote sparked a political crisis as both candidates claimed victory.

When the unity deal was finally signed after prolonged and difficult negotiations, Ghani embraced Abdullah briefly at a low-key ceremony in the presidential palace that lasted less than 10 minutes.

Neither candidate spoke at the ceremony, and it remained uncertain when they would address the nation or when the power-sharing agreement would be officially published.

Kerry said he expected the presidential inauguration to be held next week, while a spokesman for Abdullah said September 29 had been pencilled in.

“During the election process fraud was committed from all sides. That has concerned people.”

In a move likely to trigger complaints over transparency, Nuristani gave no figures for the winning margin, turnout or the number of fraudulent ballot papers thrown out in an UN-supervised audit that checked every individual vote.

Ghani was widely acknowledged to be on the brink of the presidency after coming well ahead in preliminary results released before the audit began.

“Hamid Karzai wishes the elected president Dr. Ashraf Ghani and the CEO Dr. Abdullah Abdullah success based on the agreement between them,” said a statement from the outgoing president.

The vote count was plagued by setbacks amid allegations of massive fraud, emboldening the Taliban insurgents and further weakening the aid-dependent economy.

As tensions rose in Kabul, the United Nations and United States pushed hard for a compromise to avoid a return to the ethnic divisions of the 1990s civil war, which ended with the Taliban taking power in 1996.

A ruling coalition between opposing camps is likely to be uneasy.

Under the constitution the president wields almost total control, and the new government structure will face a major test as the security and economic outlook worsens, with international aid declining.

Abdullah, a former anti-Taliban resistance fighter and foreign minister, draws his support from Tajiks and other northern ethnic groups. Ghani, an ex-World Bank economist, is backed by Pashtun tribes of the south and east.

“There will be two powers in the government, and it will be very difficult for them to work together,” Sediq Mansoor Ansari, an analyst and director of the Civil Societies Federation, told AFP.

“I think the people of Afghanistan will wonder about their votes, and how their votes have been played with.”

According to a copy of the unity government document seen by AFP, the CEO could become the official prime minister in two years’ time — a major change to the strongly presidential style of government forged by Karzai since 2001.

Dividing up other government posts could also create friction after the long and mercurial reign of Karzai, who built up a nationwide network of patronage.

About 41,000 NATO troops remain in Afghanistan fighting the fierce Taliban insurgency alongside Afghan soldiers and police.

NATO’s combat mission will end in December, with a follow-on force of about 12,000 troops likely to stay into 2015 on training and support duties.