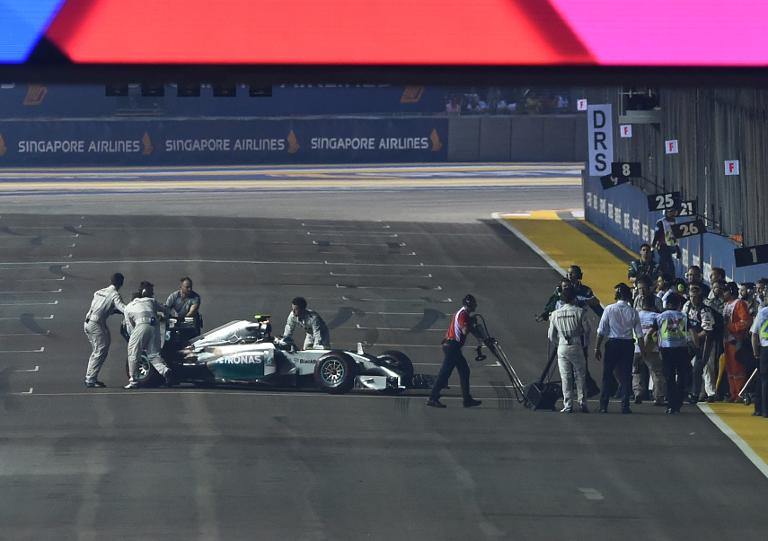 Mercedes on Monday pledged it will do all it can to prevent poor reliability deciding the destiny of this yearâ€™s driversâ€™ world championship.

The Britonâ€™s win enabled him to leap three points clear of Rosberg in the championship with five races remaining.

Despite Hamilton’s latest success the Mercedes team are deeply concerned that component failures can wreck one of the most thrilling title duels in recent times.

â€œWe don’t want to have the spin that the championship was decided because one car let the driver down,” said Mercedes team chief Toto Wolff.

â€œWe have to prevent that and we will do all we can to do so.

â€œRight now, we need to refocus, get our heads down and keep concentrating and work out what we can do to prevent DNFs (Did Not Finishes) and reliability problems.”

A broken loom in the steering column of Rosbergâ€™s car on Sunday meant that he could not start the race from second place on the grid, alongside Hamilton, and was forced to abandon the contest after 14 laps.

Rosberg described it as his toughest day of the year and very frustrating as he watched Hamilton secure victory and the leadership for the first time since May.

Rosberg had problems before his car took to the track ahead of the race as none of the controls on the steering wheel – including the gears and clutch – worked as he tried to get it out of the garage.

Wolff said the problem had been traced to the steering column.

â€œIt looks like a broken loom in the steering column, which was within the duty cycle and not towards the end of its life cycle,” he said. â€œIt just shut the whole thing down.â€

He went on to add that the team was flying the failed parts back to its Brackley headquarters so that a full analysis could be carried out.

Rosberg said: â€œNone of the steering wheel functions worked, so I had no hybrid power, no DRS (Drag Reduction System),” he explained.

“The gear paddles sort of worked which was strange, but they would always up shift two gears at a time, so I had no fourth or sixth gear.

â€œIt was just all over the place, and that’s why I was slow. My brake balance was completely in the wrong place and I couldn’t brake properly because I couldn’t change that, so everything was out.

â€œThe toughest day of the year for meâ€¦.”

It was the teamâ€™s fourth mechanical retirement this season, the total shared equally two-two between the two drivers, but Hamilton has suffered other problems.

Technical boss Paddy Lowe said: â€œIt’s been my worry all year. I have a feeling that it’s reasonably even in terms of how we’ve let them down. Let’s hope this is the last time.”

Wolff apologised to Rosberg, who stayed with the team for their post-race celebrations, but struggled to enjoy Hamiltonâ€™s win with the same vim he might have enjoyed one of his own.

Wolff said: â€œHe was not destroyed by it all, not at all. You could see him sitting outside with his wife. Very professional.

â€œI told him I was very sorry we had let him down and we are doing this in both directions. You need to be just open and have that philosophy in the team that whoever messes up needs to take that on.

â€œWe have a great reliability team. This is a group of people who are really dedicated to reliability and I am really proud of them.

â€œSo it is even more astonishing we keep having those issues. They need to get a grip – and this takes time and we will do it.â€