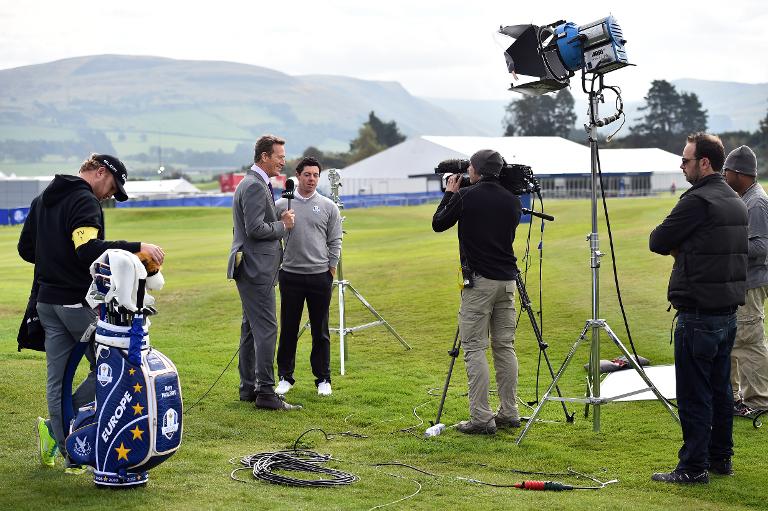 Top-ranked Rory McIlroy was a focus for both Ryder Cup captains upon arrival Monday at Gleneagles, Americans trying to defeat him and Europeans making sure he wakes up on time.

US captain Tom Watson squarely made targets of McIlroy and Ian Poulter, the hero of Europe’s shocking 2012 record-setting comeback win at Medinah.

“Certainly whenever you beat the stud on the opposing team that gives your team a boost,” Watson said when asked about McIlroy, clearly Europe’s star after winning the British Open and PGA Championship.

But Poulter, 12-3 in Ryder Cup play, has been Europe’s top scorer in each of the past three Ryder Cups. At 38th, the Englishman is ranked second-lowest of any Cup player, but with seven wins in a row in Cup play, he might be the man Americans want to beat the most.

“Right now we have got a lot of players to look at,” Watson said. “But Poulter, I think Ian with his record, he’s an 80 percent victor over the series of matches he has played in. We would like to reduce that.”

McIlroy, 4-3 with 2 halved in Cup play, overslept two years ago at Medinah and nearly missed his Sunday singles tee time, racing to the course with a police escort in time to win his match and help Europe inflict a humbling defeat.

“Our team is totally committed to bringing the Cup back,” Watson said. “I made it very clear to them that this is a redemption trip. It’s time to make amends and try to redeem yourselves from what happened in 2012.”

European captain Paul McGinley is keeping the same template that produced a winner for Europe in seven of the past nine Ryder Cups, but there is a new wrinkle when it comes to wake-up calls.

“We’re on top of that,” McGinley said. “That was a big learning curve for everybody, none moreso than Rory, and certainly won’t happen this year. We have procedures in place in order for that not to happen.”

“You’re going to knock on their doors at 5 o’clock in the morning?” asked Watson.

It does help that players this year are staying at the hotel adjacent to the course.

“The good thing about this week if somebody is late they can roll out of bed to the first tee within five minutes,” McGinley said.

McIlroy played four weeks in a row in the season-ending US tour playoffs but McGinley has no fatigue worries regarding the 25-year-old Northern Ireland star.

“I don’t have any concern,” McGinley said. He got a real good break away from golf. Resting doesn’t always mean lying in bed or by the pool for the week. He’s fresh. He’s ready.”

Neither team, however, has installed a social media policy to avoid spilling confidential matters.

“You have to trust the players at the end of the day,” McGinley said.

McGinley does not resist the favourites label given Europe this week, although he did point out the average US player ranking is 16th and only 19th for Europe.

“We’re slight favourites. We’re not overwhelming favourites,” McGinley said. “It’s a situation, if we are going to be favourites, to enbrace. It’s not something to be afraid of or be ashamed of. They guys have worked very hard to be in the position they are.”

A military plane flew low enough over the course so Watson could not hear.

“Are you using them against us this week?” Watson asked. “Is that friendly?”

Watson expects a crowd solidly in Europe’s favour despite his beloved status in Scotland, where he won four of his eight career major titles.

“The crowds are magnificent,” Watson said. “This is the nature of the Ryder Cup. It’s fine. It’s fair. This is what you expect. There’s a lot of tension.

“You will feel the electricity of the Ryder Cup when you are out on the golf course. You hear those roars and it’s just electric. That’s what I tell people — you are going to feel something you have never felt before.”