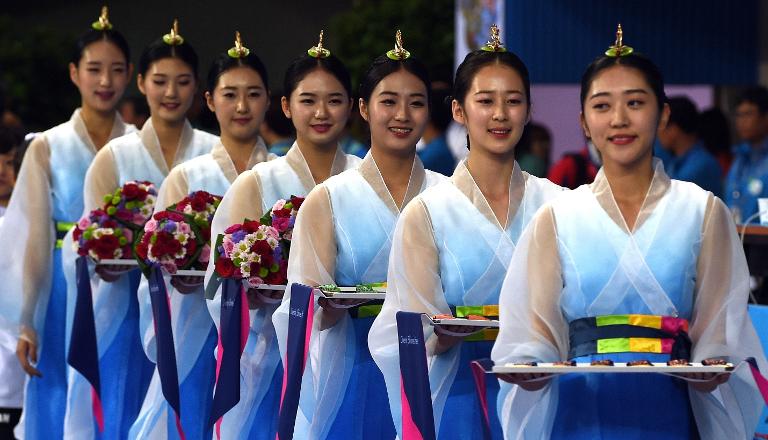 North Korea has its “Army of Beauties”, but the rival South is fighting back at the Asian Games with its “Medal Ceremony Girls”.

Many South Koreans were heartbroken when the rival North refused to send its renowned cheerleaders to the pan-Asian sporting event in Incheon, in a political wrangle.

Though praising anything about the North is against the law, people in the South admired the troupe of sharply dressed, good-looking “Army of Beauties” first brought to the South when the Asian Games were held in Busan in 2002.

But organisers of the Incheon Games hope that a 204-member South Korean beauty squad who will carry gold, silver and bronze prizes for more than 400 medal presentation ceremonies will grab the spotlight instead.

The “Medal Ceremony Girls” are all first-year students at Inha Technical College in Incheon, training to become flight attendants. Competition for admission is fierce with only one in every 100 applicants accepted.

For the presentations, the squad members wear a dress based on a traditional hanbok gown, and their tied-back hair is topped with a Korean-style tiara as worn by the country’s former royalty.

The shoes are conservative but still have attitude with 7.5 centimetre (three inch) heels.

The girls, with an average height of 5 feet 5 inches (168cm) are proud of their features. But they have endured eight weeks of tough training for the Asian Games.

They practiced walking with books on their heads or between their knees while carrying water bottles on trays for a balanced posture.

“Training was tough and hard to endure, but I could not give up because I wanted to compete with North Korean cheerleaders here in Incheon and attract attention from spectators,” Park Seong-Yun, a medal ceremony girl at the weightlifting contest, told AFP.

“I don’t want to compare my team with the North Korean cheerleaders, who were selected from many beautiful girls, but I think we are better looking,” she said.

North Korea’s “Army of Beauties” have taken part in three international sporting events in the South, and proved a major ticket draw each time. The aura surrounding the troupe has increased since one veteran, Ri Sol-Ju, became the wife of North Korean leader Kim Jong-Un.

Park, 20, said her colleagues have trained hard to put on a flawless show of elegance when they deliver the medals.

“This is one of the most crucial affairs in my life, and I know my mission is very important,” said Park.

It was Park’s first encounter with a North Korean, but she achieved her mission in front of a packed audience, including a dozen North Korean officials and athletes waving their national flags from the stands.

“I’m sure they are a delight to watch,” said Lee Young-Hee, a professor of aircraft cabin service management at Inha, who helped train the South Korean squad.

“My students were well qualified because of image-building classwork. After eight weeks of special training, they became perfect as medal ceremony girls,” she said.

The professor was confident that her students would showcase the beauty of South Korean women.

“Compared to North Korean cheerleaders, my girls have poise and a polite attitude and are better in every aspect,” she said.