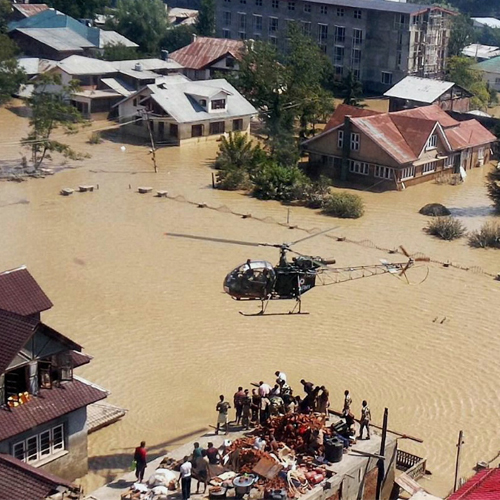 Srinagar: Seventy Army installations, including camps, bunkers and posts, have been hit by the devastating floods in Kashmir Valley but security forces have swiftly relocated the damaged and washed out posts to plug the gaps in the sensitive border areas.

The installations were partially submerged or totally inundated in the floods but security forces managed to rescue all troops manning them. “Floods have badly affected 30-40 camps, posts and bunkers in the hinterland which were meant for counter terrorism operations in Kashmir Valley”, a senior Army officer said.

Similarly, 30 posts and bunkers have been badly affected along the LoC, while 10 to 15 bunkers were totally washed away, the officer said. “But we acted swiftly. We relocated and restored the posts and bunkers immediately. We left no gaps in LoC due to the washed out of bunkers,” the officer added.

Maintaining that all troops were saved from the gushing waters in camps and formations, the officer said, “Only three causalities took place â€“ two in boat capsize in Pulwama in Kashmir and one in landslide in Poonch. The bodies have been recovered”.

However, two minor ammunition dumps were affected, he said, adding small stores and other ammunition have suffered losses.

The army is performing a dual role: one to reach out to the flood-hit people and the other saving its own installations and men and guard the LoC with higher degree of vigilance.

“We performed both the roles excellently. We rescued 2.30 lakh flood-hit people, provided them relief, medicare facilities and shelter and also saved our men and ensured high degree of vigilance along the border”, the officer said. “We did not lower our guard on the borders where we killed 10 militants in encounters during infiltration bids.”