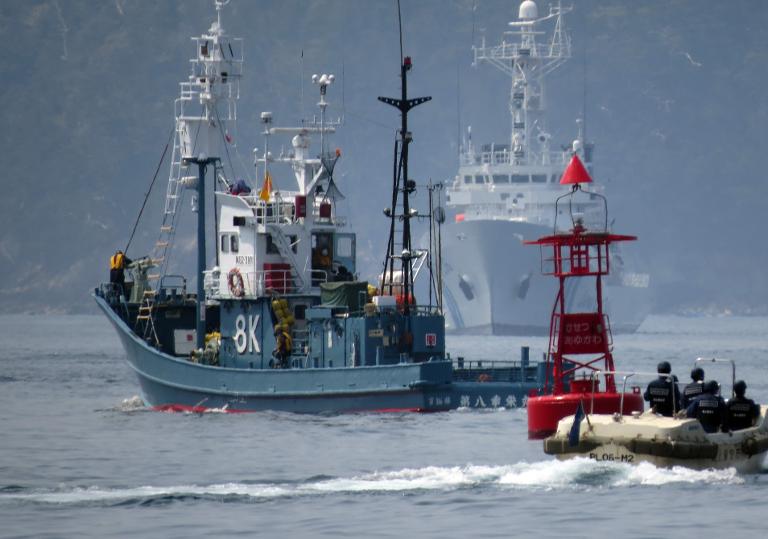 Nations square off in Slovenia this week over the fate of hundreds of whales in the crosshairs of Japanese and Greenland hunters accused of sidestepping a commercial killing ban.

The stage is set for fiery debate among International Whaling Commission (IWC) members, touching on issues of national sovereignty, aboriginal rights and the conservation of Earth’s bounty.

Trigger issues are Tokyo’s plans to relaunch its Antarctic whale hunt despite a ruling of the UN’s highest court, and a bid for Greenland’s subsistence whaling quota to be enlarged.

“We are dealing with some contentious issues and the positions of the countries at the meeting remain far apart,” Ryan Wulff, deputy United States commissioner to the IWC, told AFP.

In a statement pointing to stormy waters ahead, the IWC said it had moved “complex” issues to the top of the agenda to “allow maximum time for the 88 member governments to find ways of reaching consensus”.

The commission’s 65th meeting runs in the Adriatic resort of Portoroz from Monday to Thursday — its first since the International Court of Justice (ICJ) in March ordered a stop to Japan’s annual Antarctic hunt.

Japan cancelled its 2014/15 season but has vowed to restart the campaign.

Commercial whaling is banned under a 1986 IWC moratorium, which has seen a rebound of many species hunted to near-extinction well into the 20th century.

It allows killing only for “purposes of scientific research” and for aboriginal communities in North America, Russia, Greenland and the Caribbean nation of Saint Vincent and the Grenadines with a tradition of eating whale meat.

Japan continued hunting minkes within a whale sanctuary in the Southern Ocean around Antarctica, invoking the scientific exemption, which the ICJ found it abused.

Much of the catch ended up at restaurants and fish markets in Japan, where the tradition of eating whale meat is declining.

IWC figures show that in 2013 and during the 2013/14 Antarctic summer, Japanese hunters took 252 minke whales in the Antarctic and 92 off its own coast, as well as 100 sei, 28 Bryde’s, three minke and one sperm whale in the northwest Pacific.

A Japanese fisheries agency official told AFP that in Slovenia, his country would “explain its plan to resume research whaling in the next season (2015-16).”

Japan has not submitted a formal motion to the IWC, but New Zealand has filed a draft resolution that would place a heavier onus on Tokyo in future to prove that any Antarctic hunt is truly for science.

There is, however, nothing that prevents Japan from going ahead without the commission’s blessing.

“Any scientific question that you need to ask that is required to conserve or manage a stock, population or species of whales can be addressed through non-lethal means,” he said.

Conservationists say minkes, the main target for commercial and subsistence whalers, is one of few species seemingly in decline, though not yet endangered.

In Portoroz, Japan will also elaborate on plans for “small-scale commercial whaling in its coastal area,” with a target of 17 minkes, the fisheries official said. These are also opposed.

Denmark, meanwhile, is under scrutiny in its bid for a larger quota for aboriginal subsistence whalers in Greenland, an autonomous, Danish-dependent territory.

Critics say some of the catch ends up on tourists’ plates in local restaurants.

“We have concerns that the proposal is commercial,” said Kitty Block of conservation group Humane Society International (HSI).

At the last IWC meeting, in 2012, the quota sought for Greenland was rejected after a bust-up between Denmark and fellow EU members.

But whaling went on regardless. IWC figures show nine fin-, eight humpback-, and 181 minke whales were caught off the Greenland coast in 2013.

The latest proposal has the backing of Japan and the United States, which with Europe is keen to bring Denmark back under IWC control.

Another topic for debate is a southern hemisphere proposal for a South Atlantic whale sanctuary, which requires 75 percent of votes to pass, and has failed before.

“Conservation countries don’t hold a three-quarters majority,” said Block. “No side does.”

Questions will likely be asked of Norway and Iceland, whose governments issue commercial permits under an objection or reservation registered against the moratorium.

Parties including the United States are pushing for the commission to take on a bigger conservation role, given that there is actually little “legal” whaling to control.