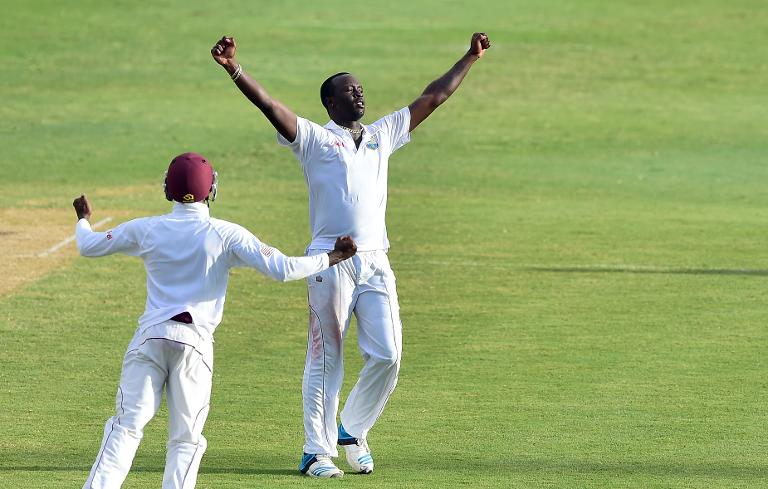 Kemar Roach was at his devastating best as Bangladesh were reduced to 104 for seven at stumps after the West Indies were dismissed for 380 in their first innings on the second day of the second and final Test on Sunday.

In two sustained, controlled spells, the fast bowler tore through the top-order of the touristsâ€™ batting to finish with five for 33 -â€“ his sixth five-wicket innings haul in Test cricket.

Jerome Taylor joined in the rout with two wickets, including captain Mushfiqur Rahim to keep the pressure on the beleaguered Bangladeshis.

Only Tamim Iqbal offered any sustained resistance on a pitch that continues to offer assistance to the fast bowlers. He got to 48 before edging a probing delivery from Roach to wicketkeeper Denesh Ramdin.

Bangladesh go into day three needing another 76 runs to avoid the follow-on with Mahmudullah and tail-ender Shafiul Islam at the crease.

Shivnarine Chanderpaul was the fulcrum of the home sideâ€™s batting effort in the first half of the day, compiling an unbeaten 84 as the wickets fell around him once the fourth-wicket partnership with Darren Bravo was broken after an hourâ€™s play.

Displaying greater discipline on a helpful pitch than on the first day, the Bangladesh seamers reaped considerable reward in the morning session.

Al-Amin Hossain claimed two wickets in two balls after Robiul Islam had Bravo caught at the wicket for 46.

When Shafiul Islam then had Roach taken behind by wicketkeeper Mushfiqur, the West Indies had lost three wickets for one run in slipping to 269 for seven from the overnight 246 for three.

Chanderpaul continued to soldier along at his very serene pace to his 65th Test half-century, being overshadowed by the big-hitting Taylor who blazed 40 in a 54-run eighth-wicket stand before finding Mahmudullah on the long-on boundary off the bowling of left-arm spinner Taijul Islam.

Taylor should have departed on 18 but Mominul Haque dropped a skier at cover when the fast bowler sliced another attempted heave off Shafiul Islam.

Yet Al-Amin, whose bowling action was reported during the 10-wicket first Test loss in St Vincent, was the most impressive of all, finishing with three for 80.

Following Robiulâ€™s dismissal of Bravo, he induced an edge from Jermaine Blackwood for Anamul Haque to take the catch at first slip and then had West Indies captain Ramdin caught behind first ball to spark celebrations among the Bangladeshis.

That celebratory mood was muted by successive half-century stands with Taylor and Sulieman Benn during which Chanderpaul edged closer to a 30th Test century.

But while he was denied in the first innings of the first Test in St Vincent by a declaration, this time it was the dismissals of Benn and last man Shannon Gabriel in quick succession that left him unbeaten for the 48th time in his 20-year Test career.