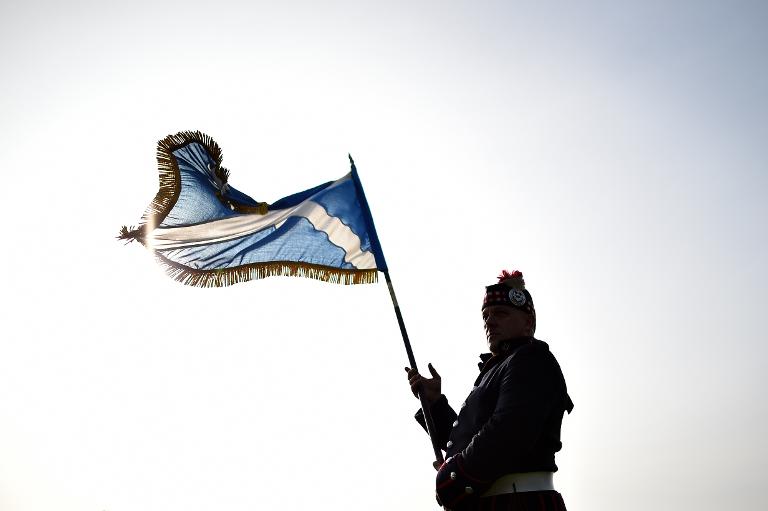 Thousands of members of the Protestant Orange order marched through Edinburgh on Saturday in a show of strength against Scottish independence, as campaigning ahead of the referendum entered its final weekend.

Organisers claimed up to 15,000 people attended the march to show support for the United Kingdom, among them members from Northern Irish and English branches of the ultra-conservative, anti-Catholic organisation.

The official campaign against independence had distanced itself from the protest amid fears it would fuel sectarian tensions just a few days before Thursday’s vote, but it passed off peacefully.

“We are proud to be part of Great Britain. We are passionate about the union. We are here to galvanise the ‘No’ vote,” Henry Dunbar, Grand Master of the order’s Grand Lodge of Scotland, told a rally in the shadow of Edinburgh Castle.

Across Scotland, campaigners from both sides were pounding the streets at the end of a week that saw pro-unionists forced to raise their game following an opinion poll that put the pro-independence camp ahead for the first time.

However, a new Survation poll on Saturday suggests the “No” campaign has regained its lead, recording 47 percent support to the “Yes” camp’s 40.8 percent, with nine percent undecided and 3.2 percent unwilling to say.

Separately, an Opinium survey for Sunday’s Observer newspaper placed the “No” camp on 47.7 percent and “Yes” on 42.3 percent, with 10 percent either not voting, or not sure if they would.

However, an ICM online poll conducted for the Sunday Telegraph found that the pro-independence campaign had widened its lead to seven points, but respected pollster John Curtice issued a “health warning” due to its small sample size.

Both sides say they are taking nothing for granted, and the “Yes” campaign led by Scottish National Party (SNP) leader Alex Salmond has 35,000 volunteers out this weekend and plans to deliver 2.6 million leaflets over two days.

Members of the official “Better Together” campaign had rejected the Orange order’s involvement in what they said should be a non-sectarian push to keep the union together.

Orange marches in Northern Ireland often descend into violence, and a 12-year-old spectator was hit in the face with a bottle at an event in Glasgow in July.

After that incident, opposition Labour lawmaker Jim Murphy said: “I want nothing to do with them.”

Many in the unionist “No” campaign are also wary that interventions by outsiders may be counterproductive, including last week’s visit by British Prime Minister David Cameron.

Watching the streams of Orange order pipe bands and marchers singing “God Save The Queen” through the streets of Edinburgh, “No” voter Ginger Fraser said he did not think Scots would be swayed by the event.

“I don’t think it will affect the vote. People make up their own mind,” he told AFP.

Salmond predicted at a campaign event that they would decide convincingly in favour of independence.

“I’m afraid that Mr Cameron and his Tory friends in Downing Street, and their Labour frontmen in Scotland, are going to get their comeuppance next Thursday, because Scotland is going to go for yes in very substantial proportions.”

Business leaders and economists issued a string of warnings this week about the risks of breaking from the 300-year-old union, and Saturday’s poll indicated their message was hitting home.

Some 40 percent of voters said they believed they and their families would be financially worse off in an independent Scotland, against 27 percent who believed the contrary.

The nationalists have reacted with anger at dire economic predictions made by big businesses and banks, which they dismiss as speculative and say are being orchestrated by the London government.

He threatened energy giant BP with nationalisation, although on Saturday Salmond tried to play down his remarks.

“The day after a ‘Yes’ vote will be a day of celebration for the people, not reckoning for big companies drawn into the ‘No’ campaign by Downing Street,” the SNP leader said.