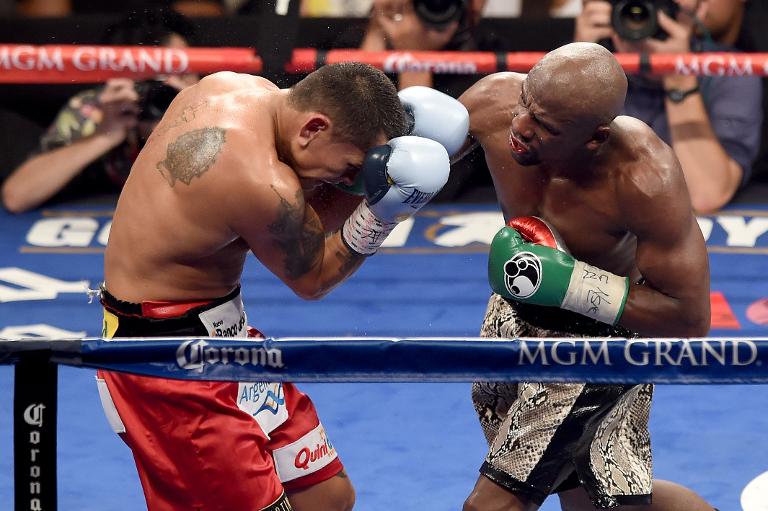 Undefeated boxer Floyd Mayweather scoffed at claims he is showing signs of aging, saying he’s kept his perfect record intact because of his ability to make mid-fight adjustments.

“I can’t say what aging felt like. I felt like the winner,” said Mayweather, who turns 38 in February.

“I can make adjustments instantly and that is one of the pluses on my side.”

Mayweather is trained by his father Floyd Mayweather Sr. but said he ignored his dad’s advice and instead decided to play it safe in the final round of the rematch.

Before the 11th round, Mayweather’s father told him to stay out of trouble and save energy in the 11th then come out firing in the 12th to make a good impression on the judges.

“My dad was like in the 12th ‘I want you to be sharp. Exchange with him and make it look good,'” Maywheather said.

Mayweather was frustrated often during Saturday’s fight by what he labeled dirty tactics by Maidana. He said Maidana bit him on the hand in the eighth round.

Maidana denies the charge, saying that Mayweather intentionally poked him in the eye.

“We clinched and we came together. My hand was under him and he bit my three fingers. My middle finger busted open through the glove when he bit me,” said Mayweather.

“I think he needs to move over to MMA. It is extremely dirty.”

Unlike their first fight four months ago, Mayweather and Maidana did not attend the post-fight news conference together.

Wearing dark sunglasses and sporting a swollen upper lip, Mayweather looked more beat up this time. He said Maidana hit him with one of his hardest punches in the third round.

“I’ve been in the sport 18 years. Boxing is wear and tear on your body. It is another fight, another victory, and time to move on.”

This is Mayweather’s fourth fight in a six-fight contract with Showtime. He doesn’t plan on fighting again until 2015 and says he could even wait until September.

The boxing champ deflected questions about whether he plans to fight Filipino superstar Manny Pacquiao next.

“In the past, if you look at Pacquiao when he fought (Juan Manuel) Marquez, he was too focused on Floyd Mayweather instead of the guy in front of him and you saw what happened,” he said, recalling Pacquiao’s defeat.

“I never think about Pacquiao. That’s not my focus. I could care less what Pacquiao does. If it happens, it happens.

“I want to enjoy my time off. We don’t know who we going to be fighting. We are not in a rush. We are the A side and we are going to take our time.”