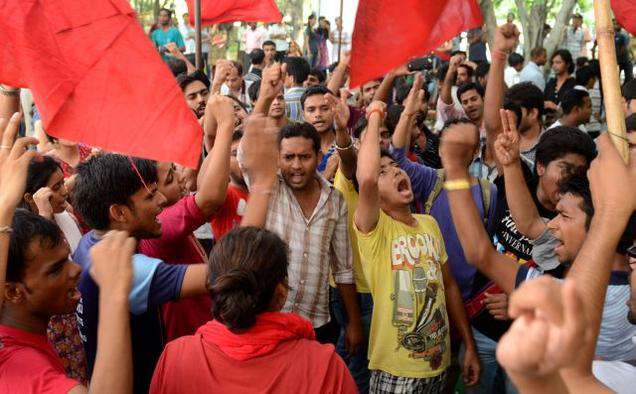 Akhil Bharatiya Vidyarthi Parishad (ABVP), which had swept the Delhi University elections held on Friday following a high-voltage campaign on issues relating to womenâ€™s safety, failed to win any of the four top posts in JNU elections.

AISAâ€™s Chintu Kumari defeated her nearest rival Ashish Kumar Dhanotiya of ABVP by a margin of 814 votes bagging the post of General Secretary.

Shafqat Hussain Butt was elected as the Joint Secretary after defeating Mulayam Singh of LPF by a margin of 240 votes, officials conducting JNUSU elections said.

Last year too, the ultra-left AISA had swept the union polls winning all the top positions.

â€œWe have got a clear mandate. This is a response to the fascist forces in the country,â€ said Ashutosh Kumar, the new JNUSU President. 31 councillors belonging to several schools in JNU were also elected on Saturday.

Five candidates each for the posts of union Vice-President, General Secretary and Joint Secretary were contesting the polls.

As the results came out on Sunday, students gathered outside the School of International Studies (SIS) and chants of â€˜Lal Salaamâ€™ and â€˜Naxalbariâ€™ filled the air.

In the Left-dominated JNU campus, surprisingly the right-wing ABVP has stood second in two of the four central panel seats â€“ Vice-President and General Secretary.

In the JNUSU polls held on September 12, more than 54% students had exercised their franchise and womenâ€™s safety and hostel facilities surfaced as the key issues.

In a first, the Election Committee had introduced â€˜None of the Aboveâ€™ (NOTA) option for the polling this time. More than 300 NOTA votes were cast in three of the four central panel seats.

Digital voting, which was also introduced for the first time, was widely used by visually impaired students. JNUSU is the representative body of the students in the varsity. The polls have been keenly contested over decades.