Home Sports France in final Italy fight back against Swiss 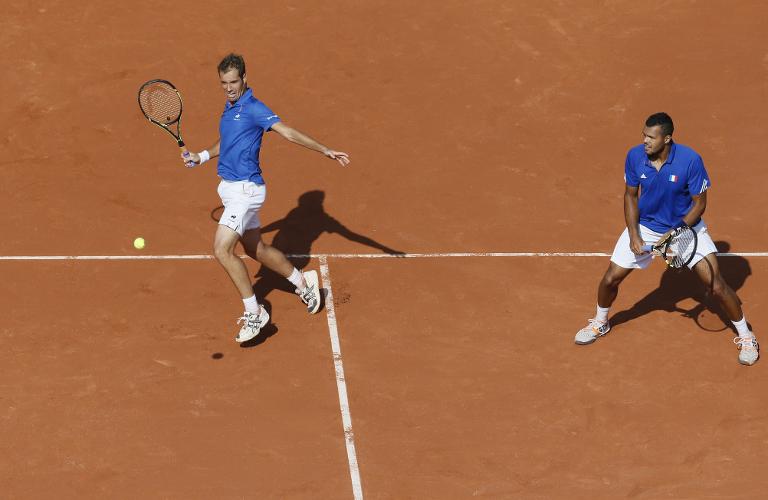 France reached the Davis Cup final for the first time since 2010 on Saturday when they took an unassailable 3-0 lead over two-time defending champions Czech Republic in their semi-final.

In the November 21-23 final, France will tackle either Switzerland or Italy whose semi-final in Geneva saw the home side pegged back to 2-1 after the Italian team won Saturday’s doubles.

It was just the second loss in 17 doubles outings for the veteran Czech pair with their previous defeat coming in the 2009 final against Spain.

Gasquet and Tsonga, who had only previously played together on one occasion — in January’s first round win over Australia — had won Friday’s opening singles with Gasquet beating Berdych 6-3, 6-2, 6-3 and Tsonga seeing off Lukas Rosol 6-2, 6-2, 6-3.

However, their efforts on Saturday were aided by a hip injury to Stepanek while an out-of-sorts Berdych was clearly unsettled by the patriotic fervour inside Roland Garros, the home of the French Open.

Despite dropping the first set, the French pair capitalised on Stepanek’s woes who struggled for movement around the court especially in the fourth set.

After two breaks of serve, Tsonga served out the match to secure a place in the final, four years after their last appearance which resulted in a defeat to Serbia.

“It’s for sure one of the best moments in our career to play here in a semifinal and to win in the second day,” said Tsonga.

“We always kept the fighting spirit and stayed in the match — we all know the Davis Cup is tough.”

Bolelli and Fognini both lost their singles ties on Friday to Federer and Stan Wawrinka respectively but came through 7-5, 3-6, 5-7, 6-3, 6-2 against Swiss pairing Wawrinka and Marco Chiudinelli to ensure that the tie will be decided on Sunday.

Federer, who was rested on Saturday as in 2009 against the same rivals, will once again be called on to seal the decisive point on Sunday against Fognini.

“This point was very important for us, even if Roger wasnâ€™t playing,â€ said Fognini.

“I am much happier with my performance today, I served much better than yesterday, I returned much better. Itâ€™s still going to be very difficult for us but itâ€™s a little less difficult than before.”

The Swiss are bidding for a place in the Davis Cup final for just the second time after finishing second to the United States in 1992.

In the play-offs, where the winners will be assured of a World Group place in 2015, US Open champion Marin Cilic teamed up with Marin Draganja to claim a 6-2, 3-6, 6-3, 6-4 victory over Robin Haase and Jean-Julien Rojer as 2005 champions Croatia took a 2-1 lead over the Netherlands in Amsterdam.

In Perth, Lleyton Hewitt steered Australia back to the World Group with a dominating performance in the doubles win over Uzbekistan.

The 33-year-old warhorse, continually fending off retirement questions, partnered Chris Guccione to a 6-3, 7-6 (7/5), 6-2 victory over the Uzbek pair, Denis Istomin and Farrukh Dustov, to clinch the tie.

The 28-time Davis Cup champions were in an impregnable position after Hewitt and youngster Nick Kyrgios won Friday’s opening singles in straight sets.