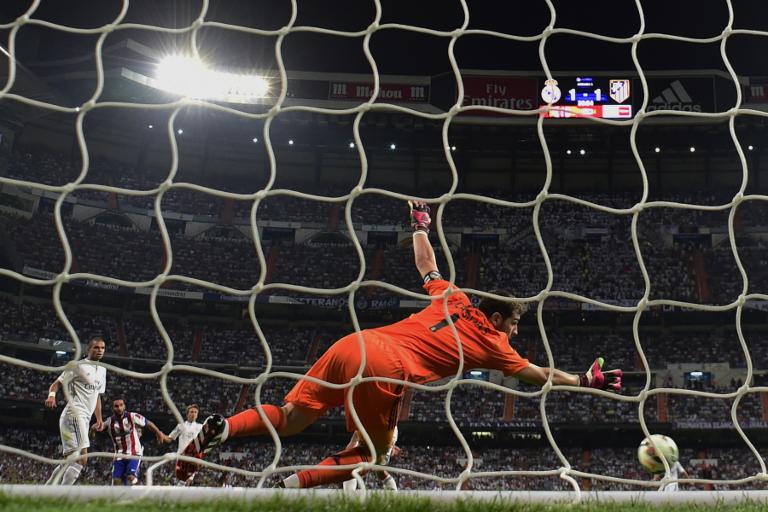 Atletico Madrid gained some measure of revenge for their heartbreaking Champions League final defeat to Real Madrid by beating the European champions 2-1 at the Santiago Bernabeu on Saturday.

A second consecutive La Liga defeat for Real leaves them already six points adrift of leaders Barcelona after just three games as they were 2-0 winners over Athletic Bilbao earlier in the day thanks to a double from Neymar.

Atletico got off to the best possible start as Tiago headed home Koke’s corner, but Real were soon level as Cristiano Ronaldo won and then converted a penalty midway through the first-half.

“I think it is the first time we have won twice in a row in the league at the Bernabeu and that is very important for our fans and a new group of players,” said Simeone.

“We still have difficulties ahead to have the consistency we want, but with the work rate they showed and the play they showed in the second-half I am happy.”

Real coach Carlo Ancelotti, meanwhile, was at a loss to explain why his side’s performance dipped so alarmingly in the second-half, just as it did in losing 4-2 at Real Sociedad a fortnight ago.

“It is a problem. We have to analyse it in the next few days and fix it quickly.

Ronaldo was playing after a three-week layoff due to injury, but even his return couldn’t cure Madrid’s weakness at set-pieces which was exposed in their 4-2 defeat to Real Sociedad last time out.

Atletico went in front with the first clear opening for either side as Koke’s in-swinging corner was met with a bullet header from Tiago at the near post.

The conceding of the goal led to large swathes of the Bernabeu booing Real captain Iker Casillas when he touched the ball.

However, the hosts responded well to going behind and after Miguel Angel Moya had produced a stunning save to claw away a Gareth Bale free-kick, Ronaldo levelled from the penalty spot after he had been felled by Guilherme Siqueira.

Karim Benzema then had a great chance to put Real in front after a neat one-two with Ronaldo but his first touch let him down and Moya flew out from his goal to smother.

And Moya denied the Frenchman once more with a great low save after Benzema had powered a Ronaldo cross towards goal just before the break.

Real’s momentum towards the end of the first-half petered out after the restart, though, as Atletico began to take control after the introduction of substitutes Turan and Antoine Griezmann.

Turan was inches away from restoring Atletico’s lead when he cut inside Alvaro Arbeloa and curled the ball just wide 15 minutes from time.

The Turkish international made amends just two minutes later though as he swept the ball into the far corner at the end of a lovely move involving Griezmann, Juanfran and Raul Garcia.

Atletico now trail Barcelona by two points after the Catalans made it three wins from three under new boss Luis Enrique as Neymar came off the bench to score twice in a 2-0 win over Athletic Bilbao at the Camp Nou.

The Brazilian had been left out of the starting line-up after his exertions in captaining his country for the first time in wins over Colombia and Ecuador in the past week, but made the difference in a tight contest when he slotted home from Lionel Messi’s pass 11 minutes from time.

And the two combined once more five minutes later as this time Messi breezed past three Athletic defenders before cutting the ball back for Neymar to side-foot home.

“Messi is the best in the world. He is a star and I am improving with him,” Neymar told Canal Plus.

“I am very happy with the game today. It went perfectly with the two goals.

“We knew we would suffer a little bit, but we managed to remain tight at the back and then went onto win the game.”

Enrique was also quick to laud the impact made by Messi in creating both goals, as he also did for Sandro’s winner at Villarreal two weeks ago.

“It is evident that he is best in the world in any attacking aspect,” he said.

“This version of Messi helps us a lot because he is a game changer. He does things in training that you can’t imagine, things I haven’t even seen on the Playstation.”