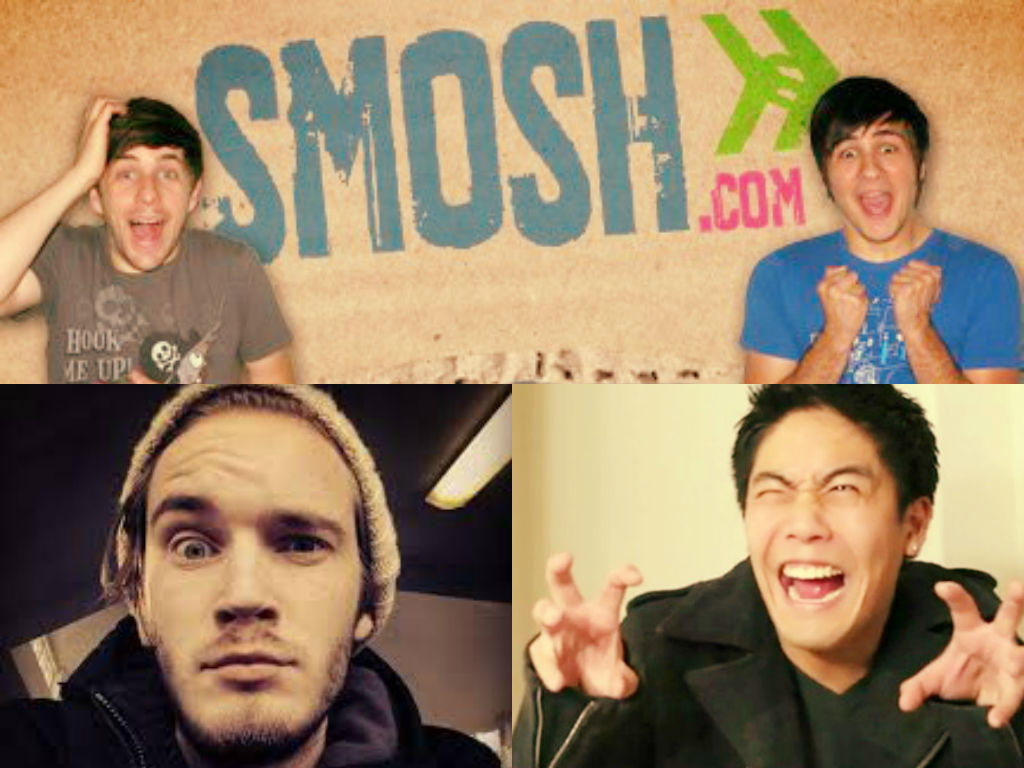 YouTube is almost unfathomably huge. The website receives over 1 billion unique views a month, and over 6 billion hours of video are watched every monthâ€“ almost an hour for every single human being on the planet.Â

YouTube videos can be big business for top independent content creators. Many have capitalised on it and became YouTube celebrities with their channels. These are the YouTubers who have shot to fame with their ever growing online fan base.

Smosh, a comedic duo of Anthony Padilla and Ian Hecox, first gained recognition on YouTube by lip-synching the PokÃ©mon anime, and Mortal Kombat theme songs. This prolific group started in 2002 creating flash videos for Newgrounds, a social media website. They have created 8 different Youtube channels and have even catered to Spanish speakers. Smosh has essentially become a sort of Media Empire, and even sold games in the Apple App store and for Android. A quick look at Smosh.com reveals that the two have a site filled with massive amounts of original content.

HolySoyGerman is weekly video blog where German Aklegandro Germandia talks about life and various topics. Â His channel has become the most subscribed Spanish-speaking channel on YouTube and his success is based on his highly animated and staccato-edited videos. His videos focus on humorous ways to approach everyday issues which helped attract a large amount of Spanish viewers and steadily increased his popularity with viewers.

Jenna Marbles, aka Jenna Mourey has become one of the most recognizable faces on YouTube as well as the most subscribed female-run channel on the site. While Jenna is undeniably good-looking, her videos feature standard comedic fare such as impressions, jokes, but mostly Jenna stands out with her brilliant insightful perspectives on being a woman in todayâ€™s societyâ€“ as per her most famous video below.

The New York Times put it beautifully saying â€œHer videos are a highly shareable cocktail of comedy, sex appeal, puppies and social commentary, laced with profanity. She skillfully juggles Facebook, Twitter, Instagram and YouTube to build a deeply loyal connection with fans who find her eminently easy to relate to.â€

Ryan Higa, better known by his online alias Nigahiga is a YouTube celeb who started uploading videos since 2006. Â His channel tends to center around pop cultural fads, and broad comedic topics such as dating, internet culture, and socializing at large. Ryan tends to be the star of his videos, but like most YouTube celebs he has collaborated with others in the business. Curiously, Higa has a black belt in Judo.
Â

RWJ is a YouTube star who was among the first to realize that combining vlogging with viral videos made for tremendous success. His first series was known as Equals Three that reviews and criticizes viral videos on the web. The episodes became so popular that Johnson was able to obtain celebrity guest stars such as Robin Williams, Sarah Silverman on the show. Johnson launched a collaborative YouTube channel called â€œYourFavouriteMartianâ€ in 2011. The channel features a virtual band comprised of four fictional characters that perform their own original content as well as covers and remixes.

Pewdiepie Aka Felix Arvid Ulf Kjellberg is a Swedish YouTuber who specializes in a little phenomenon he created known as â€œLetâ€™s Play.â€ This highly simple formula has catapulted many to immense success on YouTube and is so stupid; you wouldnâ€™t believe it was entertaining until you saw it with your own eyes. His popularity lies in his ability to connect and entertain viewers while providing humorous commentary when playing games.

He is most notable industry-wise (outside of video) for his promotion of independent video game makers. When Pewdiepie plays a game, its sales tend to be boosted tremendously. He refers to his fans as part of his â€œbro army.â€