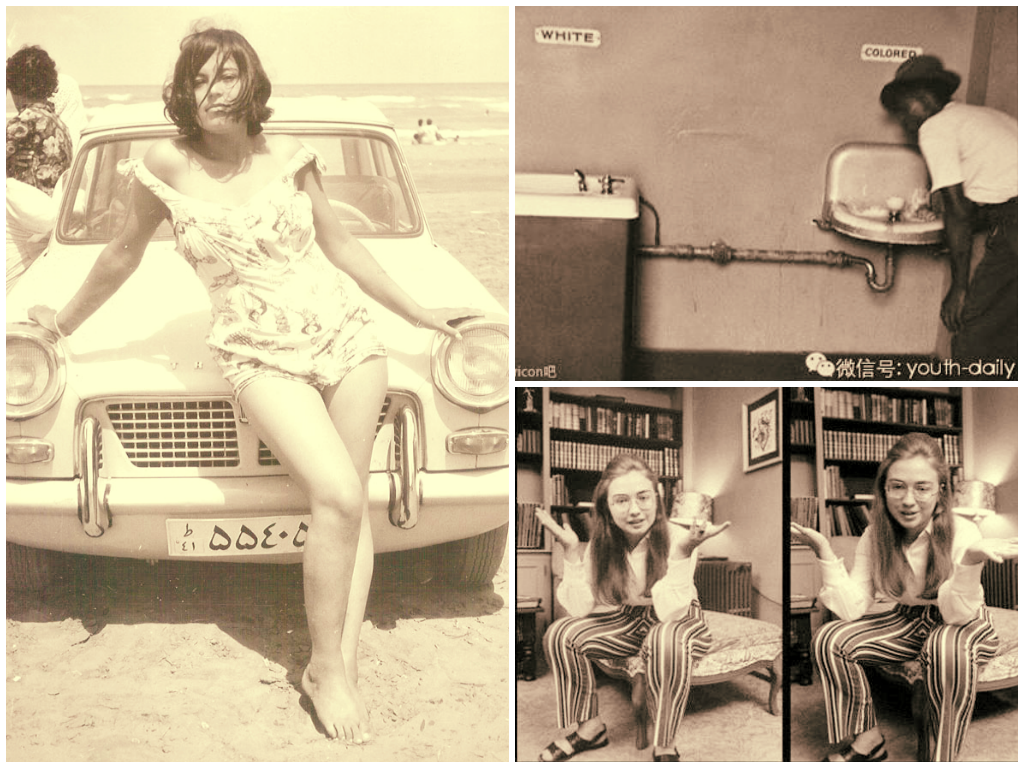 New Delhi:Â History has often been told through iconic pictures. More than half a century ago,Â the space race was heating up and the Cold War was freezing over. Soviet missile bases discovered in Cuba triggered a crisis that brought the US to the brink of war with the USSR. Civil rights activists won hard-earned victories against segregationists in the American South, and John Glenn became the first American to orbit the Earth.

As years pass, governmentâ€™s change, people age and technologies progress. We look at some of the pictures that bear witness to the past.

The red light district in Seoul, Korea, marked as off limits to American GIâ€™s in 1945.

For decades, one of the main areas, Itaewon was known as a dangerous â€œcamp town,â€ inhabited by prostitutes and aggressive touts hawking knockoffs. But it was also a district where English was widely spoken, and Itaewonâ€™s shops, restaurants, bars, expatriate business people and English teachers as well as soldiers.

Now these areas are still covered with notorious brothels which can trap an unsuspecting tourist.

The atomic bombings of the cities of Hiroshima and Nagasaki in Japan were conducted by the US during the final stages of World War II in August 1945. The two bombings were the first and remain the only use of nuclear weapons in warfare. Around 80,000 people, of whom 20,000 were soldiers, or around 30% of the population of Hiroshima, were killed by the blast and resultant firestorm and another 70,000 injured.

Racial segregation in the US, as a general term, included the segregation or “hyper segregation” of facilities, services, and opportunities such as housing, medical care, education, employment and transportation along racial lines. For much of the 20th century, it was a popular belief among many whites that the presence of blacks in a white neighbourhood would bring down property values. Public segregation was challenged by individual citizens on rare occasions but had minimal impact on civil rights issues, until December 1955 in Montgomery, Alabama, Rosa Parks refused to be moved to the back of a bus for a white passenger. Parks’ civil disobedience had the effect of sparking the Montgomery Bus Boycott and became an international icon of resistance to racial segregation.

Bwana Devil is a 1952 US adventure film based on the true story of the Tsavo maneaters and filmed with the Natural Vision 3D system. The film is notable for sparking the first 3D film craze in the motion picture industry, as well as for being the first 3D feature film entirely in color and the first 3D sound feature in English. Bwana Devil was written, directed and produced by Arch Oboler and stars Robert Stack, Barbara Britton and Nigel Bruce.

When you hear the word â€œIranâ€, what comes to you mind first? Veiled women, burning flags of America and Israel or angry crowd shouting nationalist slogans? But those who kept the memories of Iran in 1960â€²s-70â€²s would be able to paint a completely different picture â€“ when skirts were short and life was sweet. In 1960s, the school, the university, the beach, the cinema and many other public places in Iran were like their western counterparts and the Iranian women were encouraged to be modern and remove their Hejab. Â But, the Iranian Revolution which began in January 1978 resulted in the establishment of an Islamic republic.

Ruby Nell Bridges Hall, born on September 8, 1954 became the first black child to attend an all-white elementary school in the South. She attended William Frantz Elementary School. In spring of 1960, Bridges was one of six black children in New Orleans to pass the test that determined whether or not they could go to the all-white school. Two of the six decided to stay at their old school, three were transferred to Mcdonough and Bridges went to a school by herself. Ruby was the only one assigned to William Frantz.

In 1965 Clinton enrolled at Wellesley College, where she majored in Political Science. During her freshman year, she served as President of the Wellesley Young Republicans. She later stepped down from this position, as her views changed regarding the American Civil Rights Movement and the Vietnam War.

Fractured by internal conflict and foreign intervention for centuries, Afghanistan made several tentative steps toward modernization in the mid-20th century. In the 1950s and 1960s, some of the biggest strides were made toward a more liberal and westernised lifestyle, while trying to maintain a respect for more conservative factions. This time was a brief, relatively peaceful era, when modern buildings were constructed in Kabul alongside older traditional mud structures, when burqas became optional for a time and the country appeared to be on a path toward a more open, prosperous society.

9. Berlin, Nov 1989 – First weekend after collapse of the Berlin Wall

The Berlin Wall was a barrier constructed by the German Democratic Republic (East Germany) starting on August 13, 1961, that completely cut off (by land) West Berlin from surrounding East Germany and from East Berlin. The barrier included guard towers placed along large concrete walls, which circumscribed a wide area (later known as the “death strip”) that contained anti-vehicle trenches, “fakir beds” and other defences. Protest demonstrations broke out all over East Germany in September 1989. A great number of East Berliners fled into West Berlin.

10. Steve Jobs with Bill Gates discussing the future of computing in 1991

Bill Gates recently gave an interview in which he speaks about his relationship with Apple visionary Steve Jobs â€“ telling how the two ‘grew up together’. The Microsoft founder wells up as he recalls visiting Jobs just before his death at home in Palo Alto, California, in October 2011.

Describing their last conversation as ‘forward looking’, Gates, 58, also reminisced about how the two technology giants shaped Silicon Valley during a friendly rivalry that lasted over 35 years.

Windows 95 integrated Microsoft’s formerly separate MS-DOS and Windows products. It featured significant improvements over its predecessor, Windows 3.1, most notably in the graphical user interface (GUI) and in its relatively simplified “plug-n-play” features. There were also major changes made at lower levels of the operating system, such as moving from a mainly 16-bit architecture to a pre-emptively multi-tasked 32-bit architecture. Windows 95 was released with great fanfare, including a commercial featuring the Rolling Stones’ 1981 single “Start Me Up”.