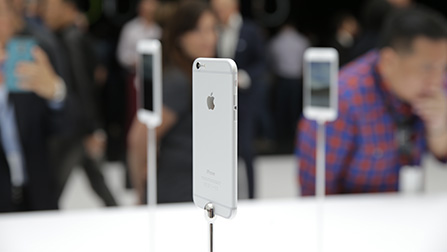 San Francisco: Customers may have to wait three to four weeks to get their hands on Appleâ€™s iPhone 6 Plus, after a record number of orders for the companyâ€™s latest smartphones strained available supply.

The iPhone 6 Plus, which has a 5.5 inches display, will take three to four weeks for shoppers who pre-ordered online on Friday, according to Appleâ€™s website, as people rushed to buy the handset hours after the company began taking pre-orders.

Certain iPhone 6 models, which have a 4.7 inches screen, will take seven to 10 business days to arrive, though some versions are still available for delivery on September 19. Pre-orders through some individual carriersâ€™ websites indicate shipments could take even longer.

â€œResponse to iPhone 6 and iPhone 6 Plus has been incredible, with a record number of pre-orders overnight. Pre-orders are currently available online or through the Apple Store App,â€ said Trudy Muller, a spokeswoman with Cupertino, California-based Apple.

This isnâ€™t the first time Apple and phone carriers have seen iPhone models delayed well before they were available in stores. In 2012, the iPhone 5 was delayed for shipment by a week after a rush of orders and in 2011 the iPhone 4S sold out at AT&T, Verizon Wireless and Sprint Nextel Corp. only five days after pre-orders began.