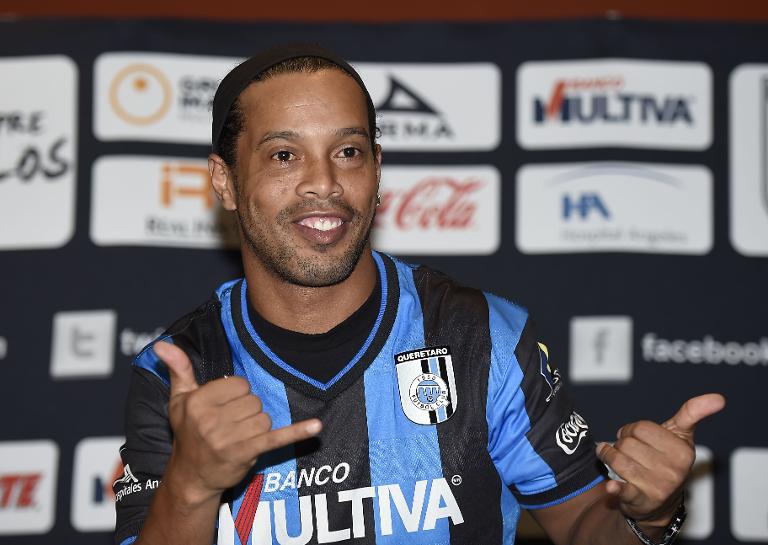 “I need to win something in Mexico and I’ve come for that,” said the former two-time world footballer of the year as he pulled on his new black and blue stripped jersey with his name and number 49.

The former Barcelona player arrived in Mexico early Friday after a delay receiving his work permit, and will be presented to club fans later in the day, at half-time during a league game against Puebla.

Although the 34-year-old will not play, the 38,000 places for the game have already been sold following news of the new star’s arrival at Queretaro.

Ronaldinho, a World Cup winner in 2002, surprised many by signing a two-year deal with the side, known as the White Roosters and from central Mexico, after amicably ending his tenure at Brazilian club Atletico Mineiro in July.

Ronaldinho said he decided to join Queretaro, currently 10th in the league, after discussions with his older brother and agent Roberto, who himself played in Mexico, and club president Olegario Vazquez Rana, a businessman who owns Mexican media group Imagen.

Former Barcelona player “Dinho” insisted he had received offers “from almost all over the world” but “the conversation with my brother and with the group president won me over; I always wanted to live here, that’s why I’ve come, to continue my story”.

Capped 97 times for Brazil, he returned home to Flamengo in 2011 but walked away from the Rio club after a year over a salary dispute.

He then scored 28 goals in 88 matches for Mineiro.