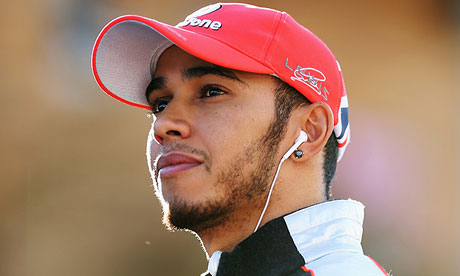 An inspirational role model and ideal ambassador for his profession, this wonder kidâ€™s life is characterised by an indefatigable drive and intense determination.

His parents separated when he was only two years old. He lived with his mother till he was 12 and then moved with his father who played a monumental role in his choice of career.

Coming from a mixed race background, he has been verbally heckled and abused by racist spectators during his career but he has overcome all odds.
Â

His father who was his mentor and manager as well, worked day and night for years (at one time he held three different jobs) to further his son’s racing career, which effectively began when eight-year-old Lewis was given a well-used go-kart that cost nearly as much as the family’s modest monthly income.

Sporting a yellow helmet chosen by his father to better keep track of his progress in crowded kart fields, the boy racer began winning races and championships.

10-year old Lewis got a chance to get an autograph from the boss of McLaren Mercedes Formula One team, Ron Dennis and said, â€˜’Hello Mr. Dennis, I’m Lewis Hamilton and one day I’d like to race for your team.’ Â Ron signed him an autograph and said ‘Call me in nine yearsâ€™.

Three years later, Ron presented Anthony with an offer to financially support his son’s career for the foreseeable future.

He proved his mettle winning eight championships in six years of kart racing; he went on to win three major single seater titles. Autosport ranked him number 24 in its list of Top 200 Drivers.

His F1 career started when it was announced that he would be partnering defending double World Champion Fernando Alonso at the Australian Grand Prix in 2007. He finished third in the race.

He finished in the top five of his first five races and won his first Grand Prix in Canada, going on to win again in America. In 2008, He won the British Grand Prix, the Shanghai round and, despite coming in fifth in Brazil, the final race of the season- he clinched the World Championship on points at the age of 23.

In 2012, Hamilton won the Canadian Grand Prix for the third time and came first at the Hungarian Grand Prix on 29 July 2012. His final win of the season was in Texas but, dogged by back luck and crashes, he finished fourth.

Most wins in a debut season: 4 wins (record shared with Jacques Villeneuve in 1996)

Most points in a debut season: 109