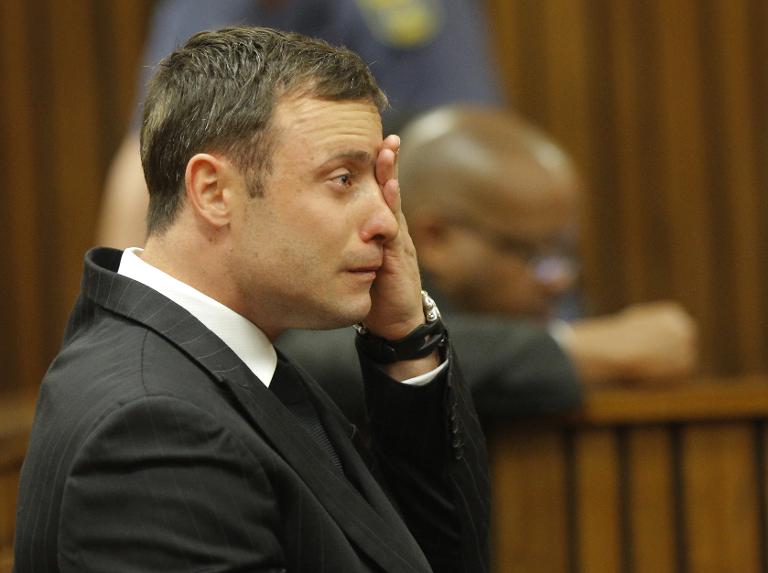 “Blade Runner” Oscar Pistorius wept in the dock on Thursday as a judge began handing down her verdict on whether the star Paralympian was guilty of the Valentine’s Day murder of his model girlfriend.

Judge Thokozile Masipa moved swiftly into her assessment of the almost 40 witnesses, apparently rejecting state evidence that pointed to an argument between the couple.

“Neither the evidence of the loving relationship or a relationship turned sour can assist this court to determine whether the accused had the requisite intention to kill the deceased,” she said.

The judge also reviewed evidence by neighbours who testified of hearing shots and screams, saying many “had their facts wrong”.

She said huge media coverage of the case could have affected some witnesses.

“I am of the view that they failed to separate what they knew personally or what they heard from other people or what they gathered from the media,” she said.

Some interpreted her remarks as a blow for the prosecution, although she also cast doubt on the evidence of some defence witnesses.

And she said Pistorius himself in his evidence showed “a number of defences, or apparent defences”.

After reading a list of contradictory statements in Pistorius’s testimony, she said one assertion “is inconsistent with someone who shot without thinking”.

Grimacing and sniffling, the 27-year-old celebrity sprinter watched as Masipa called Pretoria’s High Court to order and read her verdict.

If found guilty of deliberately killing girlfriend Reeva Steenkamp in the early hours of Valentine’s Day 2013, he faces a life in South Africa’s infamously tough prisons and notoriety that would forever eclipse his sporting achievements.

Pistorius is charged with one count of murder and three firearms offences.

Masipa restated the undisputed facts of the case — Pistorius killed the law graduate and model when he fired four shots through a locked toilet door in his upmarket Pretoria home.

The sprinter doesn’t deny this, but says he thought he was shooting at an intruder while Steenkamp was safely in bed.

The prosecution says he killed her in a fit of rage after an argument.

The verdict is the climax of a six-month murder trial that has cast a harsh spotlight on the fallen hero’s private life.

Full of high drama, the trial has fed intense media interest worldwide, with live broadcasts veering into the realm of TV reality shows.

During proceedings Pistorius has broken down, weeping and at times vomitted as he heard how the 29-year-old blonde’s head “exploded” like a watermelon under the impact of his hollow-point bullets.

On Thursday, a man selling papers on a nearby street corner said he couldn’t keep up with the demand. “Maybe you can come later,” said Thomas Mdlule, the 29-year-old vendor, rushing to count out change for his customers.

Inside the court Pistorius’s sister and the implacable mother of the woman he killed looked on from the packed public gallery.

June Steenkamp arrived to the courtroom early on Thursday, accepting a hug from a supporter wearing a “Imprison for Reeva” paper pinned to her shirt.

Prosecutors have described the double amputee as an egotistical liar obsessed with guns, fast cars and beautiful women, who refused to take responsibility for his actions.

The court heard transcripts of phone messages in which the pair argued, Steenkamp texting: “I’m scared of you sometimes, of how you snap at me.”

Defence lawyers sought to explain there are “two Oscars”: a world-class athlete and a highly vulnerable individual with a serious disability who acted out of fear, not anger, when he fired the fatal shots.

If Masipa decides Pistorius deliberately murdered Steenkamp, he could face a life sentence, which in South Africa means 25 years in jail.

Masipa could also decide that Pistorius did not kill her intentionally, but did act recklessly, opening the door to a lesser charge of culpable homicide, which could still carry a prison term.

Any guilty verdict is unlikely to be the end of the case.

There will be more courtroom arguments before a sentence is handed down and, most likely, an appeal to a higher court.

“The trial is the first leg of a multi-legged legal process. It’s just the beginning,” said lawyer David Dadic.

Whatever happens, Pistorius’s glittering sporting career is likely to be over.

Once a poster boy for disabled sport, he has been stripped of lucrative endorsement deals by global brands and has withdrawn from all competition.