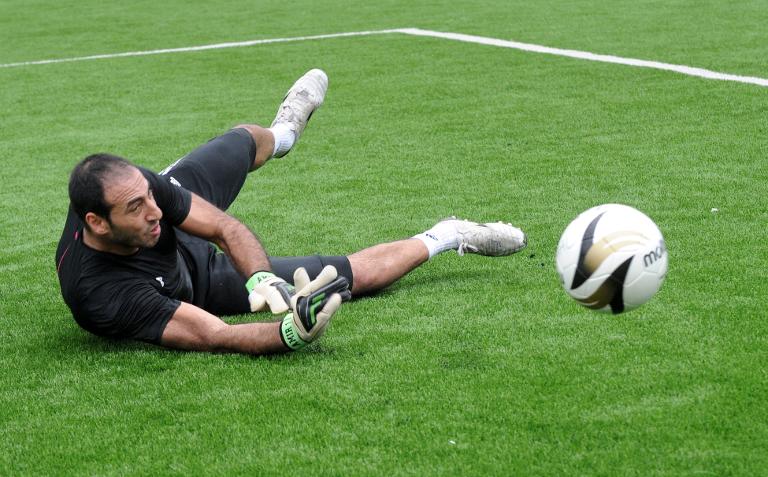 For goalkeeper Ramzi Saleh, representing his Palestinian homeland on the football field is about far, far more than playing the beautiful game.

The veteran keeper gives the impression that throwing his tall, powerful frame across the goal to block shots is as much a political statement as a sporting endeavour.

“We want to send a message to the world, to tell them that the Palestinian people exist despite all the Israeli obstacles, the destruction, the martyrs,” Saleh told AFP last week at a friendly tournament in the Philippines.

Saleh, who was born in Egypt to parents from Gaza, is a legend of Palestinian football, having played a record 103 internationals during a 14-year career.

The 34-year-old was also captain when Palestine won the Asian Football Confederation Challenge Cup in the Maldives in May, keeping a clean sheet throughout the tournament.

The victory earned Palestine a berth in next year’s Asian Cup in Australia, propelling them to a best-ever world ranking of 85 and triggering delirious celebrations in their Gaza and West Bank homelands.

Football is hugely popular in Gaza and the West Bank, where the game has been played since the 1920s during the time of the British mandate.

The Asian Cup will be the Palestinians’ first major international tournament. Their under-23 team will also play this month’s Asian Games in Incheon.

But the euphoria at reaching the Asian Cup was short-lived, as another brutal phase of the Palestinians’ decades-long land struggle with Israel erupted.

Seventy-two Israelis and one Thai national also died before the two sides agreed to a ceasefire in late August.

Twenty-six Palestinian sportsmen and sportswomen were among those killed in the conflict, according to Amri Hannoun, the Palestinian Football Association’s press officer, who also travelled to the Philippines.

The dead included ex-midfielder Ahed Zacqut, a Gaza legend who never made it to the national team but was one of the territory’s most respected football coaches.

Palestinian coach Jamal Mahmoud, who resigned following the Peace Cup tournament in the Philippines, said the conflict had sapped team morale and distracted the players.

“Many players have families in Gaza, so maybe his home was destroyed and maybe somebody from his family is dead, or his friends may be dead. So when he plays he’s always thinking about the war in the Gaza,” Mahmoud said.

The weight of the war showed during the team’s two matches at the invitational Peace Cup in Manila.

Without any recognised strikers, they were trashed 1-4 in their first game by Myanmar, ranked 72 places below them.

In the second, they struggled to a 3-3 draw at full-time against Taiwan, who are ranked even lower than Myanmar, but then scored four goals to nil during extra time.

Mahmoud and Saleh complained that, aside from the emotional impacts of the recent war, their team had again had to endure many problems that have long prevented the Palestinians from achieving their full potential.

Mahmoud said Israeli policies made it hard for players, coaches, referees, officials and equipment to get in and out of the territories, even when there is no fighting.

He said travel restrictions had prevented him from selecting Gaza-based players, while Gazans playing for West Bank clubs as well as the national team were unable to visit their relatives back home.

For the Peace Cup, Mahmoud said his players were short of match-fitness because the conflict had delayed the start of the two Palestinian professional leagues.

Five Gaza-based players who would have been on the national team were not allowed to leave for the Philippines, according to Mahmoud.

The Palestinians were able to pull together a squad of just 13 players, mostly from the West Bank Premier League, for their match against Myanmar.

They were then reinforced by Javier Cohene, a Paraguay-born defender based in Europe who scored on his debut against Taiwan.

Israel insists its restrictions on Palestinian football are essential, alleging militants use football facilities to fire rockets at its cities and take advantage of the sport to spread anti-Israeli propaganda.

In April, Israel also detained Palestine striker Samah Maraabeh, 22, on suspicion he delivered money, messages and a mobile phone in Qatar to an exiled Hamas militant.

Nevertheless, Mahmoud said adversity could also steel his side.

“These obstacles just make us stronger. That’s why we’re here, because we don’t stay quiet in the face of the Israeli occupation,” he said.