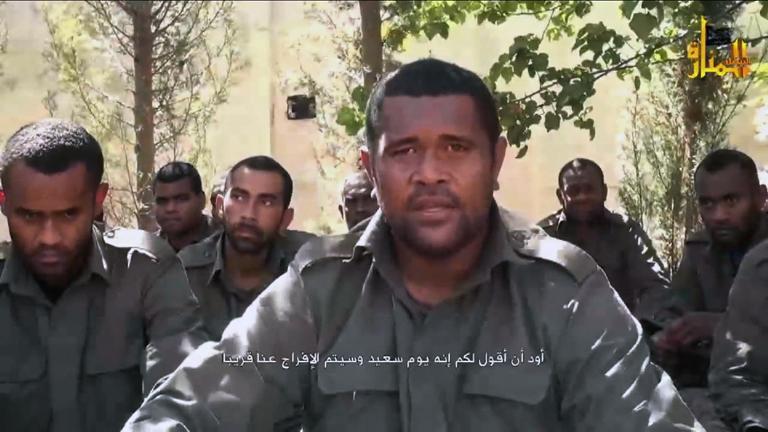 A group of 45 UN peacekeepers kidnapped two weeks ago in the Syrian Golan were released Thursday and are in good condition, a UN spokesman said.

The Fijians were serving in the United Nations Disengagement Observer Force, which is monitoring a 1974 ceasefire between Israel and Syria in the Golan Heights.

“Today at 1430 local time, the 45 Fijian peacekeepers who had been detained were handed to UNDOF at Position 80,” the spokesman said.

“All the 45 peacekeepers are in good condition,” he added, saying they would undergo a medical checkup.

A short while later they had crossed over from Syria into Israel, a spokeswoman for the Israeli army told AFP.

An AFP correspondent said they were being taken in UN vehicles to a UN base near Quneitra in the Israeli-occupied Golan Heights.

They were captured on August 28 by Al-Qaeda-linked Al-Nusra fighters who stormed a Golan Heights crossing and forced them to surrender their weapons.

The rebels also besieged a second group of peacekeepers, Filipinos, who refused to disarm and managed to escape.

Al-Nusra said in a video late Wednesday that it planned to free the Fijian peacekeepers, dropping demands for aid, a prisoner release and the removal of the group from a UN terror blacklist.

A Fijian peacekeeper, who did not identify himself, also spoke in the footage, confirming that the group had pledged to free the soldiers.

“It is Tuesday, the ninth of September, I would like to mention to you that it is a very happy day,” the peacekeeper says in English.

“We have been informed that we will be released soon and we are all very happy to be going home.”

The peacekeeper adds that the troops “are all safe and alive” and thanks Al-Nusra “for keeping us safe and keeping us alive.”

“I would like to assure you that we have not been harmed in any way,” he says.