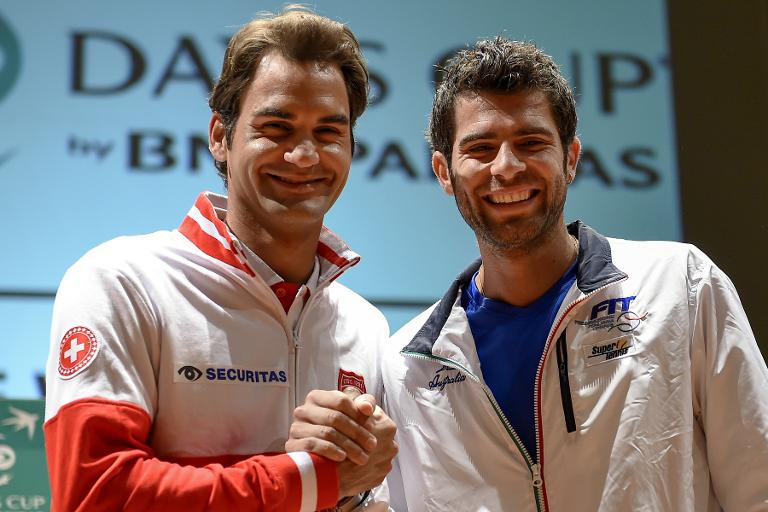 Roger Federer will open Switzerland’s bid to reach the Davis Cup final for the first time in Geneva on Friday against 76th-ranked Italian Simone Bolelli.

Federer and Wawrinka are back again on Saturday for doubles duty, against Paolo Lorenzi and Andreas Seppi, with Sunday’s reverse singles seeing Federer up against Fognini and Wawrinka taking on Bolelli.

The choice of Bolelli to take on Federer comes as a surprise as he is ranked 28 places behind Seppi, who played singles in both rounds this year to help Italy reach their first Davis Cup semi-final since 1998.

Captain Corrado Barazzutti is however hoping to pull off an early shock with Bolelli, who has won several Challengers titles this season, although he has lost his two previous ties against Federer, including a Davis Cup clash in Genoa.

The odds appear to be stacked in favour of the hosts, playing on a hardcourt surface, who have never lost on home soil to the Italians despite Italy’s 3-2 advantage overall in Davis Cup.

Victory would put the Swiss into a November 21-23 final against either France or two-time defending champions the Czech Republic who will contest the other semi-final in Paris.

In Roland Garros, France captain Arnaud Clement has opted for Richard Gasquet to open against Tomas Berdych with Jo-Wilfried Tsonga then paired against Lukas Rosol.

Clement overlooked Gael Monfils, who had said he had not totally recovered after his journey to the US Open quarter-finals where he was beaten by Federer.

Monfils, ranked 18th, has however been included in Saturday’s doubles alongside Julien Benneteau, although this pairing has little chance of coming off as Monfils has limited doubles experience.

Benneteau won the claycourt French Open doubles title at Roland Garros this year alongside Edouard Roger-Vasselin, while Gasquet and Tsonga played together at the Australian Open.

Berdych led the Czech Republic, backed up by veteran Radek Stepanek, to the past two Davis Cup titles.

It will be a 15th clash between the two nations, with both standing at seven each to date.