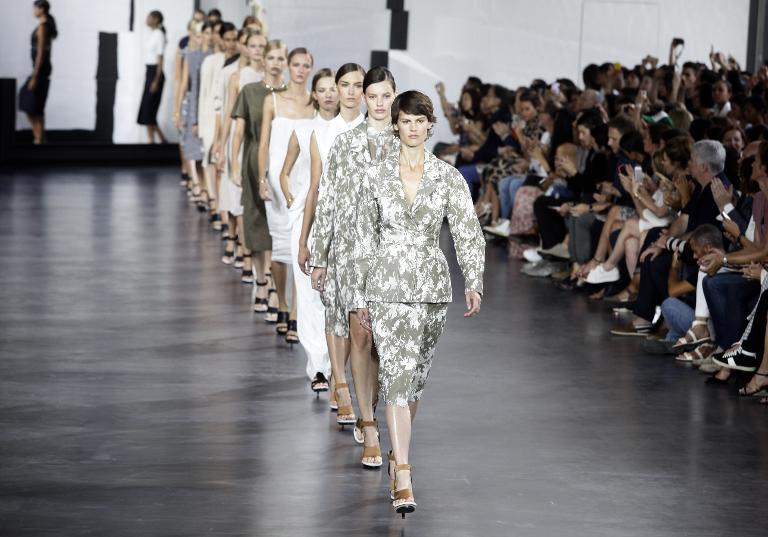 Thirteen years after the 9/11 attacks, New York Fashion Week made history by presenting a catwalk show at the World Trade Center with a stunning collection for Jason Wu at Hugo Boss.

After the romantic elegance of Michael Kors in the morning and much-talked-about group effort by pop diva Miley Cyrus and bad-boy designer Jeremy Scott, Wu unveiled his second collection for Hugo Boss womenswear on Wednesday.

The show unfolded on the 54th floor of World Trade Center tower No. 4, just meters from a memorial honoring fallen firefighters and one day before New York pays tribute to the nearly 3,000 people killed in the terror hijackings.

The spectacular views of New York bay reflected perfectly the refined precision of the clothes in soft yellow, turquoise, lavender, white and black.

Inspired by a men’s locker room, the classic white shirt was reinvented for evening, worn with a long suede skirt in soft yellow and a satin belt.

Over at Michael Kors, to The Ronettes hit “Be My Baby”, the billionaire designer showcased breezy, sunny elegance for spring/summer 2015 in uber-trendy Tribeca.

Summing up his vision as “blue skies ahead,” Kors combined two leading trends of the new season — flowers and gingham.

The line was reminiscent of the 1960s: light and chic, in a bright mix of cotton, linen, denim, suede and organza.

There were soft skirts, yellow and white embroidered flowers or prints of fuchsia and violet. And chiffon-embroidered organza dominated evening wear.

Delicate flats in natural tan or black leather were adorned with knotted ankle straps and sometimes worn with satchels.

Gingham strutted the Kors runway in pink or green, in the form of a long-sleeved tunic or a short summer dress with thin straps criss-crossing the back.

“I thought it was fantastic, so great, so much fun. I loved the colors, I loved the silhouettes,” Chastain told AFP.

But the buzz of the day was 21-year-old singer Cyrus teaming up with Scott to unveil a debut art collection ahead of his show — a “psychedelic jungle” of animal print and color.

The pop star sat grinning in the front row, before accompanying the designer on a victory lap of the catwalk where she strutted in tight, multicolored pants, a bralet and towering black and yellow Adidas stilettos.

An orange dress with yellow and blue flowers was paired with clumpy boots while a translucent yellow cape was edged with hot pink fur.

Itsy bitsy gold hot pants were worn with teddy bear flip-flops, and a green-eyed-monster-style face emblazed a black T-shirt and decorated a dress. Skulls were also in the mix.

Gingham again made an appearance — this time in yellow, green and beige, fashioned into a miniskirt worn with a matching bralet.

Scott used plenty of animal themes in the form of a purple silk strapless dress covered in yellow footprints, a zebra-colored mini dress, leopard-print shorts for men and leopard-print hot pants for women.

Colors were evergreen, black, orange, white, lavender and burgundy, and a collection of sexy black dresses with fringes on the bottom.

“At the end of it, it’s a very modern girl. It’s a girl of today, it’s not retro, it’s not futuristic,” Lazaro Hernandez, one half of the Proenza design duo, told AFP.

Earlier Indian-American designer Bibhu Mohapatra offered a collection inspired by English heiress Nancy Cunard, a muse to Aldous Huxley and activist who fought for much of her life against racism and fascism.