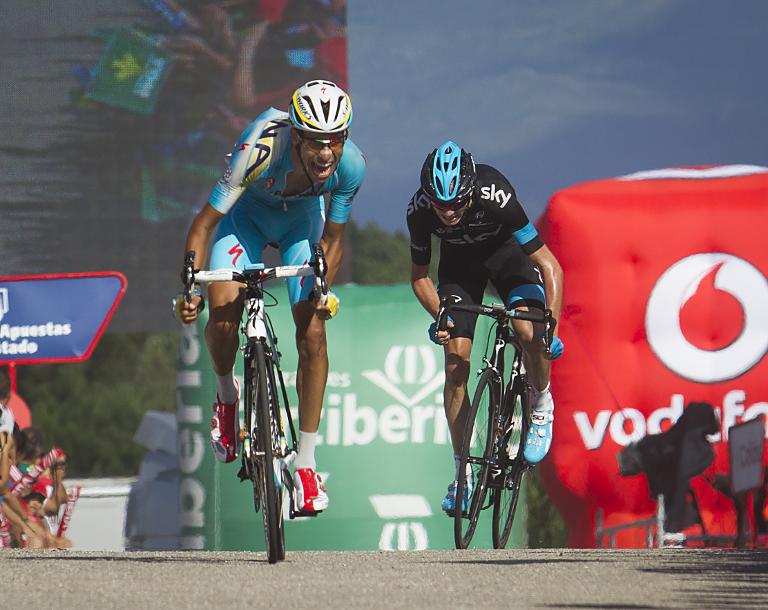 Italy’s Fabio Aru sprinted to victory in Thursday’s 18th stage of the Tour of Spain as Briton Chris Froome closed in on overall race leader Alberto Contador of Spain.

Astana rider Aru, already winner at altitude on the 11th stage at San Miguel de Aralar, benefited on the final sprint from the support of Sky team leader Froome, who clawed precious seconds from Contador to take second place in the overall standings from Alejandro Valverde.

The 31-year Contador let potentially vital seconds slip as he played a game of poker with Movistar’s Valverde and Katusha’s Joaquim Rodriguez, allowing them to assure the pursuit of Froome in the final kilometres.

“When Froome attacked, I decided to leave the responsibility to Alejandro (Valverde) because he was second in the overall standings,” explained Contador.

“I knew that the difference was going to be minimal at the finish because the final two kilometres were easier. I lost time but I hope it won’t be a problem.”

The Spaniard could however face a challenge to his bid for a third Vuelta title especially during Saturday’s difficult climb to the summit of Col d’Ancares and Sunday’s time-trial at Santiago de Compostela.

The 24-year-old Aru, fifth in the overall standings, attacked late and was given a boost when he was joined by Froome to coast to victory.

“My energy isn’t the same after 18 stages but I’d really prepared for the Vuelta. It’s the first time that I’ve raced here, I like the route and hope to come back.”

Swiss rider Fabian Cancellara (Trek), Dutchman Robert Gesink (Belkin) and Belgian Tom Boonen (Omega Pharma) all pulled out of the race before the 157km stage from A Estrada.

Gesink, who had been seventh in the overall standings before the stage in northwestern Galicia, withdrew for family reasons.