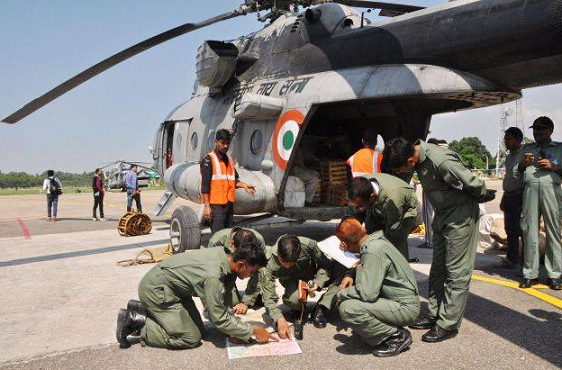 New Delhi: The collapse of communication systems in the flood-hit Kashmir Valley has become a major stumbling block in rescue efforts.

The only ray of hope is being provided by social media networks which have come in handy for spreading distress messages from thousands of stranded people.

â€œMy family is stuck at HNo. 456 MIG Colony Bemina… I request all my contacts to shared message and use their good offices to evacuate ppl inside… my network may go off anytime… pls I request allâ€¦ (sic)â€ said a post by Aamir Bin Masood on a Kashmir floods community page on Facebook.

The page was flooded with similar distress messages. Phone lines are down in Srinagar, where lakhs are still stranded.

In the absence of communication networks, most people are still beyond the reach of rescuers.

But Facebook, twitter and WhatsApp are proving to be of immense help to rescue teams. IAF helicopter teams are being provided with information on stranded people through the Internet so that crews can evacuate them.

The immense devastation caused by floods has been captured in photographs posted on social media.

The Army is using social media apps to save the lives of people stranded in the flood affected areas of J&K.

The Army headquarters is forwarding all the distress messages received by it on its website, Facebook page and Twitter handle to a WhatsApp group, including senior commanders in the Northern Command, from where troops on ground are being directed to help the people in stress, Army’s ADG (Public Information) Maj-Gen Shaukeen Chauhan said.

So far, distress messages from across the country have been received with people seeking to know about their missing relatives and the Army has tried to reach to them, he said. The WhatsApp group includes senior commanders of the Srinagarbased 15 Corps and Nagrota-based 16 Corps along with the units in field areas, Army officials said.

A group of organisations have also come together to accelerate the process of reaching out to the flood victims and donors through a website www.jkfloodrelief.org.

They have made a list of items â€“ compiled by volunteers and reliable on-ground connections â€“ to create a consolidated platform to deal with a small step in the relief operation.

The hashtag #Kashmirfloods is connecting all those who are looking for various avenues to donate, to share, to find their loved ones or to applaud rescue operation missions by the Army.

“Sending clothes is nuisance at this point,” Anshu Gupta, founder and director of Goonj, an NGO whose expertise lies in flood-rescue operations, told a news agency.

Â “What is needed right now are medicines that can fight water-borne diseases, utensils to eat, torches, good-quality solar lanterns, blankets and woollens,” he added.

Along with Goonj, Twitter India, pharmaceutical firm Cipla, Said Iqbal Memorial Trust, Uday Foundation and IndiGo Airlines have collaborated to run the website and reach out to millions who want to donate but are not sure “what and how”.

The death toll in the worst floods in Jammu and Kashmir in over 60 years is said to have crossed 200.