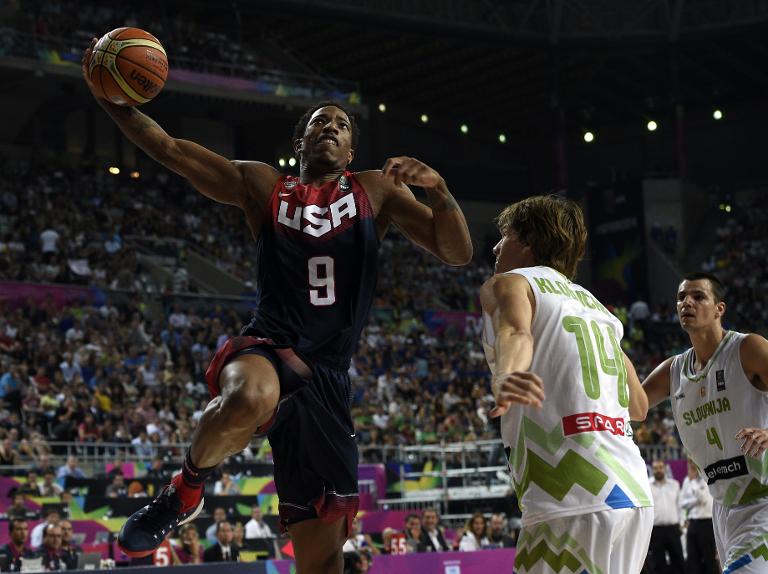 Lithuania will face holders the United States in a repeat of their World Cup semi-final four years ago after both came safely through their quarter-finals.

Lithuania, semi-finalists at the 2010 Worlds, beat Turkey 73-61 in Tuesday’s first quarter-final in Barcelona and the Americans breezed through to join them later at the same venue with a 119-76 thrashing of Slovenia.

Renaldas Seibutis was one of three Lithuanians who made three three-pointers in scoring a team-high 19 points while Jonas Valanciunas collected 12 points and 13 rebounds.

Martynas Pocius had 13 points and Darjus Lavrinovic added 11 for the winners, who got 28 points from their reserves compared to just six points for Turkey’s bench.

Turkey were paced by 13 points from Kerem Gonlum while Omer Asik had 11 points and 10 rebounds. The Turks made just 3-of-18 three-pointers (17 percent).

“I’m very proud of my players despite all the problems we had at the beginning. We did a great job,” said Lithuania coach Jonas Kazlauskas, who had to deal with losing his starting point guard Mantas Kalnietis just days before the start of the tournament.

“When we lost Kalnietis, I was thinking that would be a huge problem. He’s everything for this team. I’m very happy how we’re playing without him.”

Turkey started very strong, especially Emir Preldzic and Asik, in opening up a 14-6 lead. Valanciunas did all he could to keep Lithuania in the game though they trailed 18-13 after one quarter.

With Asik, who was playing despite suffering from flu, on the bench for a breather, Lithuania used a mismatch with big man Lavrinovic hanging out beyond the stripe and nailing three three-pointers as the Baltic side grabbed a 24-23 lead. The Lithuanians were up 33-28 at the break.

Jonas Maciulis’s three early in the second half pushed the lead to 36-28. Turkey charged back with a 12-0 run to grab a 40-36 lead. Seibutis ended the scoring drought with a three-pointer and then Pocius added two more three-pointers in helping Lithuania take a 47-44 lead after three quarters.

Turkey went the first two minutes of the fourth without a point as the Baltic side pushed the lead to 51-44 and another Seibutis triple made it 56-48.

The Lithuanians continued to use their long range shooting to extend the lead out to 64-51 with under four minutes to play.

Turkey could not get closer than eight points the rest of the way.

The Americans reached the semis thanks to a huge second half, with Klay Thompson leading six US players in double figures with 20 points.

Kenneth Faried had 14 points and 10 rebounds and Anthony Davis picked up 13 points and 11 rebounds.

The Americans used their superior size and fast break style throughout the game.

The US out-rebounded Slovenia 54-38 including 24 offensive rebounds for US, who picked up 42 fast break points to just six for Slovenia.

Slovenia jumped ahead 8-4 but the lead was short lived as the Americans went on an 11-2 run and pushed the advantage to 11 points. It was 29-22 in favour of the US after 10 minutes. The lead regularly was 12 points before Slovenia trimmed it to 49-42 at the break.

Slovenia trimmed the margin to 49-44 early in the third quarter before the Americans blew the game open with a 37-22 quarter to lead 86-64 after 30 minutes, ending all doubts.

“We had a seven-point lead and defensively, we wanted to come out and do better. They stayed in the game for 25 minutes,” said American guard Stephen Curry.

The other two quarter-finals — Serbia vs Brazil and France against Spain — will be played on Wednesday.