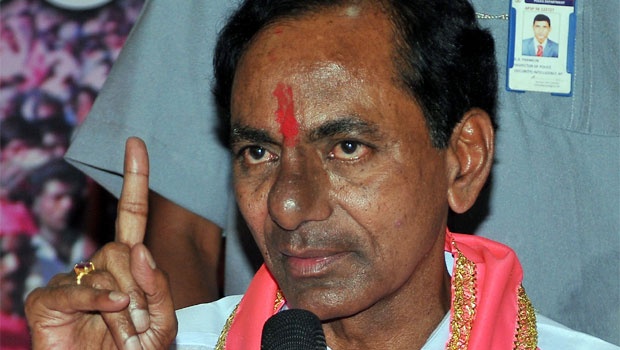 In Warangal on Tuesday, KCR, as he is popularly known, did not name them but seemed to refer to two Telugu channels â€“ TV9 and ABN Andhra Jyoti â€“ that have been protesting against what they call an unofficial ban on their transmission in Telangana.

“We will bury them some 10 km. We won’t hesitate to break their neck and then throw them out,” the chief minister of the three-month old state said, adding that those who want to continue to operate in the state “should learn to respect the people of Telangana.”

They must “salute and give respect,” otherwise worse awaits them, KCR warned.

The two channels have virtually been off air in Telangana, after they aired a satirical programme on the Telangana Chief Minister and his ministers on the day of their swearing-in ceremony on June 2 this year. Many people said it was offensive and the one of the channels has since apologised.

Journalists from the channels have been protesting in Delhi and Hyderabad, where some women protesters were roughly bundled into vans and taken away by police personnel on Tuesday.

The state government insists that it has nothing to do with the TV channels not being aired and that there is no official order to that effect. KCR, however, said if the two channels continue to insist on what they call “freedom” and do not “correct their ways”, they will have to face worse.

He said the two channels were “behaving like the Andhrawallas” by “insulting Telangana”, referring to people from the residual state of Andhra Pradesh, who, after the carving out of the new state, share a capital with it.

The chief minister has referred to the issue in the state assembly, too, threatening a privilege motion against the channels. It was also discussed in Parliament when Information and Broadcasting Minister Prakash Javadekar demanded answers from cable operators for the channels being blacked out in Telangana few days ago.