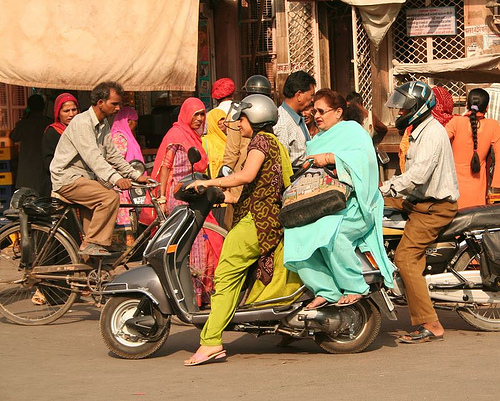 New Delhi: The new rule which makes helmet mandatory for all women two-wheeler riders in the national capital will be enforced from Wednesday. The Delhi Traffic Police will initiate a special drive to ensure compliance of a government order making wearing of helmets mandatory for women, driving or riding pillion on two-wheelers.

Women (except Sikh women) who are found not wearing helmets while driving or riding pillion on two-wheelers would now be prosecuted under the amended act, the Delhi Traffic Police said in a statement.

“To ensure compliance of the amendment made by Transport Department, GNCT of Delhi…Making it mandatory for all women (except Sikh women), driving or riding pillion on two-wheelers in the NCT of Delhi, the Delhi Traffic Police shall initiate a special drive w.e.f 10.09.2014,” it said.

Hundred teams shall be deployed at institutional areas, office complexes, market places, malls, commercial centres and important intersections such as Nehru Place, Rajendra Place, Connaught Place, among others to ensure compliance of the law.

The Delhi government had on August 28 issued a notification making wearing of helmets mandatory for women with immediate effect. Sikh women have been exempted from it on religious grounds.

According to the earlier provision, it was optional for the women pillion rider to wear a helmet. The city government amended the rule 115 of the Delhi Motor Vehicles Rules, 1993 to make the new provisions.

In 1998, the Delhi government had made wearing helmets mandatory for all pillion riders, but following objections from the people belonging to Sikh Community, it had to amend the Delhi Motor Vehicle Rules, 1993 in June 1999 and had made it optional for women.

According to the transport department, in Delhi alone, a total number of 576 two-wheeler riders lost their lives during 2012.