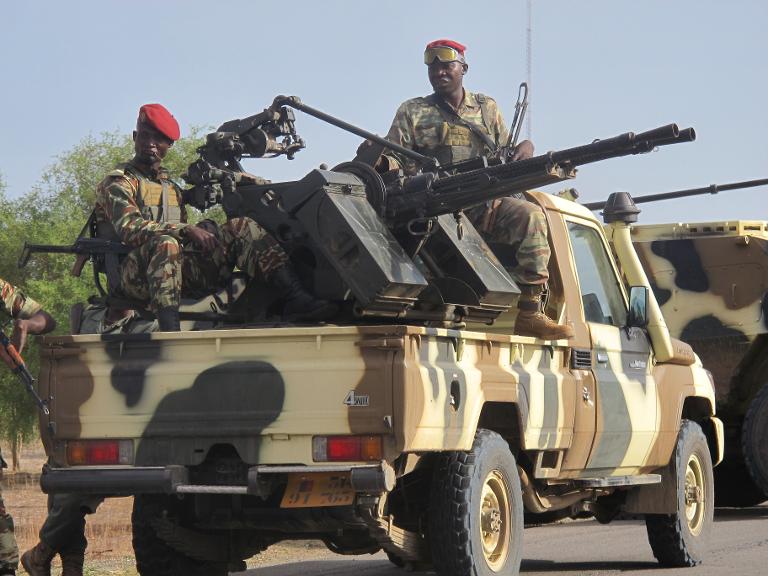 Cameroon said on Monday its soldiers had killed “more than 100” Boko Haram fighters during an attempted incursion by the Nigeria-based Islamist insurgents, while across the border thousands continued to flee the group’s advances.

The Cameroonian army dealt “a severe setback” to Boko Haram during clashes in the north of the country on Saturday, government spokesman Issa Tchiroma Bakary said in a statement read out on state radio.

The statement, which could not be immediately verified, said Boko Haram militants fired two shells on the town of Fotokol in Cameroon’s northern tip, on the border with Nigeria.

“There were no casualties reported on the Cameroonian side,” the statement said.

“Our defence forces responded vigorously with mortar fire aimed at the positions held by units of the Boko Haram terrorist group. The Cameroonian response resulted in over 100 deaths among the aggressors.”

The Boko Haram militants were pushed back towards the Nigerian border town of Gamboru Ngala, separated only by a footbridge from Cameroon, which they seized over a week ago.

Meanwhile, panicked residents continued to flee their homes in northeast Nigeria on Monday in fear of Islamist attacks.

The exodus from Mubi, the commercial hub of Adamawa state, began on Sunday after the insurgents seized the town of Michika around 40 kilometres (25 miles) away the day before.

Boko Haram has seized control of a number of towns in Yobe, Borno and Adamawa states in recent weeks, prompting fears the government could soon lose control of the entire region.

“With the fall of Michika into the hands of Boko Haram, Mubi is seen as their next destination,” Mubi resident Habu Bala told AFP.

The fear of attack grew on Monday after the families of police officers were ordered to evacuate, said resident Muhammad Maishanu.

The Nigerian military has appeared largely powerless to stop the militants’ advance.

Residents in Michika said airforce jets were circling above the town but were unable to strike because the insurgents had taken cover in civilian houses.

In Mubi, where thousands have taken refuge in recent weeks, locals were thronging the main bus depot on Monday.

“The increasing large number of passengers far exceeds available vehicles, which has resulted in commotion as people jostle and struggle to secure seats on available buses and taxis. They just want to get out,” said Samaila Ado, who works at the coach station.

The United States last week said it was alarmed by reports that Boko Haram had captured the Borno town of Bama and the possibility of an attack on the state capital, Maiduguri, 70 kilometres away.

The spokesman of the Roman Catholic Diocese of Maiduguri, Gideon Obasogie, said he fled the town on Sunday.

“Thousands of others have also left Mubi for Yola for fear of attack. The Boko Haram militants are just capturing everywhere,” he told AFP.

“The Catholic church in Maiduguri diocese is gradually crumbling. A priest in Michika had to scale a fence yesterday to avoid being killed. He had to pass through some bush and mountains before he finally made it to Yola.”

Security fears prompted the indefinite closure of the Adamawa State University in Mubi, according to a university statement.

In October 2012, Boko Haram fighters were blamed for shooting dead at least 40 polytechnic students at their off-campus hostels in the town.

The military has claimed it recaptured Bama in ground and air offensives, killing 50 insurgents in a battle near the town at the weekend.

Independent confirmation was not immediately available and in an audio message, a purported Boko Haram spokesman named Abu Zinnira refuted the claim.

The insurgents threatened to add to their territorial gains, he said.

It was not possible to verify the authenticity of the recording but AFP received the message from the same channels as previous Boko Haram videos.