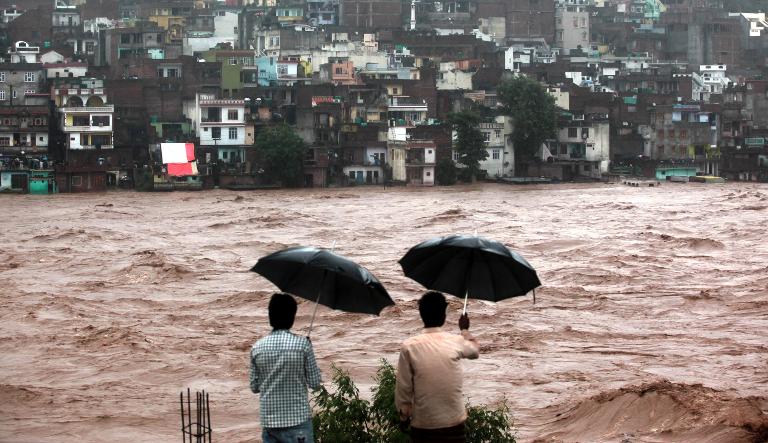 Soldiers were battling Sunday to rescue thousands trapped by Indian Kashmir’s worst flooding for half a century which has killed at least 150 people and left the main city of Srinagar under water.

Some 350 villages have also been submerged since torrential monsoon rains triggered flooding and landslides across the picturesque Himalayan region of Jammu and Kashmir, officials said.

Across the border in Pakistan, flash flooding and house collapses from days of heavy rain have left another 193 people dead, an official there said.

The rain-swollen Jhelum river flooded large parts of Srinagar on Sunday and forced residents onto rooftops, with reports the first floors of a children’s hospital and of another hospital were underwater.

Thousands of troops, police and other emergency personnel, backed by helicopters and boats, have been deployed across the state to reach those stranded, with at least 14,800 people rescued.

“More than 150 bodies have (also) been recovered so far. The exact number is hard to assess as we are still searching for bodies.”

Modi also wrote to his Pakistani counterpart, Nawaz Sharif, offering his “deepest sympathies” to flood-hit victims on that side of the border and relief assistance.

“Our resources are at your disposal whenever you need them,” Modi said in the letter released by his office.

Modi, elected in May, looked set to usher in warmer ties with arch rival Pakistan, which has fought three wars with India since independence, two over Kashmir.

But they suffered a blow in recent weeks when New Delhi called off high-level bilateral talks, angered over meetings between Pakistan’s envoy and Indian Kashmiri separatist leaders.

In Indian Kashmir, photos showed residents wading through neck-deep waters clutching their belongings, stranded on rooftops or crammed into army boats, while others showed bridges and roads destroyed.

The state’s chief minister, Omar Abdullah, said the floods were “unprecedented” but urged residents not to panic, saying rescuers would eventually reach them.

A police official in Srinagar, a city of 900,000, said he feared the extent of the devastation was not yet known because phone networks were down and areas cut off.

“We are in a catastrophic situation,” he told AFP on condition of anonymity, adding that Srinagar’s police headquarters was under water.

“Many people may have died and houses collapsed but we are not getting to know much (information),” he said.

In Srinagar, an army headquarters was also under water along with some government buildings.

An AFP reporter in the city was forced to the third floor of his house after water flooded the second, with no sign of emergency officials to evacuate him.

“We will have to move to the roof but we are also worried about the building collapsing,” he said, adding that water has risen about 12 feet (3.6 metres).

Another resident, Aakifa Javaid, said her local mosque announced on loudspeakers that “it would be a difficult night, no one should sleep” as the river overflowed.

Like hundreds of others in her neighbourhood in the city’s north, she fled in the middle of the night when the water reached her home.

Thousands of soldiers, backed by 25 helicopters and seven aircraft, have fanned out across the Kashmir Valley and the rest of the state to deliver blankets, tents and other aid, the defence ministry said in a statement late Sunday.

More than 14,800 people have been rescued so far, and 50 army medical teams deployed, it said.

Several thousand villages in the region, which has long been hit by a deadly separatist insurgency, have been damaged and 350 of them are submerged, the home ministry has said.

In Pakistan, 193 people have been killed, with 108 villages and farmland damaged, the National Disaster Management Authority spokesman said.

Prime Minister Sharif has visited some of the affected areas, the NDMA said in a statement late Sunday.

“The prime minister expressed his grief over the death and destruction caused by recent rains and floods… He assured that the government would leave no stone unturned to help the people in distress,” it added.

Heavy rains were easing and have stopped altogether in parts of Pakistan after floods hit Punjab, Pakistan-administered Kashmir and the northernmost territory of Gilgit-Baltistan.