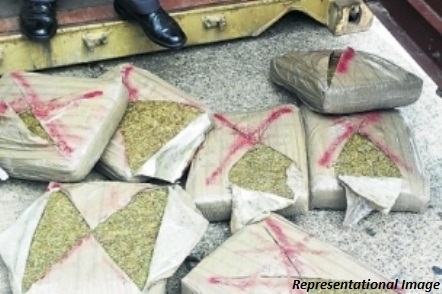 Indore: In a major haul, about one quintal of ganja worth nearly Rs 1 crore was seized by police who foiled an attempt to smuggle the contraband.

During a checking of vehicles in Lasudia area of Indore on Sunday night, police intercepted a jeep and asked its driver to stop the vehicle, a sub-inspector at Lasudia Police Station said on Monday.

The driver, however, hastily tried to speed up the vehicle in a bid to escape, he said.

When police chased the jeep, it overturned after moving some distance and all its occupants managed to run away, he said. During a search of the vehicle, police found about a quintal of ganja packed in seven sacks, the officer said.

A case has been registered and a detailed investigation in the matter was on, he added.Â