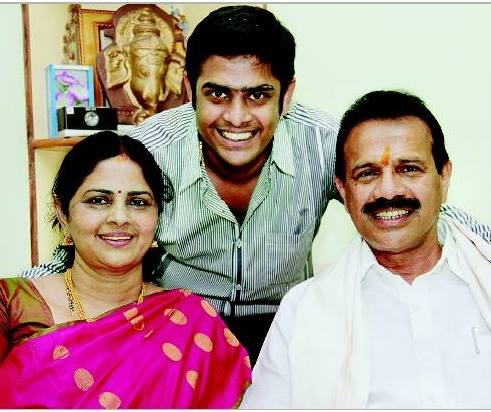 Bangalore: A local court on Monday granted anticipatory bail to Karthik Gowda, son of Railway Minister D V Sadananda Gowda, in a rape and cheating case filed against him by a Kannada actress after he got engaged to another woman.

According to reports, Karthik is absconding since the police started to investigate the case after a complaint was lodged against him.

Karthik Gowda has been accused of rape by the actress who has alleged that he developed relations with her after promising to marrying her. However, she went to police after he was engaged to an another girl.

Earlier in the day, Sadananda Gowda had said law would take its own course on the complaint of rape and cheating lodged by an actress against his son Karthik Gowda, who maintained he had been falsely implicated.

“I have spoken about it several times. Law will take its own course. I have nothing more to say,” Gowda told reporters at a press conference organised to share his ministry’s “achievements” in the first 100 days of the BJP government.

As the issue snowballed, the woman, a small-time model-turned actress, had appeared on TV channels last month, insisting she was married to the ministerâ€™s sonâ€™ Karthik Gowda and their family should accept her as the daughter-in-law.Â

The issue had also reached Karnataka Womenâ€™s Commission, whose chairperson Manjula Manasa had said that the womanâ€™s sister had approached it.Â

Last week, a Karnataka court and a Bangalore court had issued an arrest warrant against Railway Minister’s son in the alleged rape case.

Karthik was booked by the Bangalore Police on charges of rape and cheating following a complaint by a Kannada actor he had been courting for the past four months.

The actor has accused 28-year-old Karthik of marrying and dumping her after his family objected to their relationship.

The 27-year-old actor filed her complaint hours after Karthik, the only son of the Railway Minister, got engaged to a girl of his mother Datty Gowda’s choice atÂ KushalnagarÂ inÂ KodaguÂ district.

A case was registered against Karthik under sections 376 (punishment for rape) and 420 (cheating) of the Indian penal code on the basis of the complaint filed by the woman.