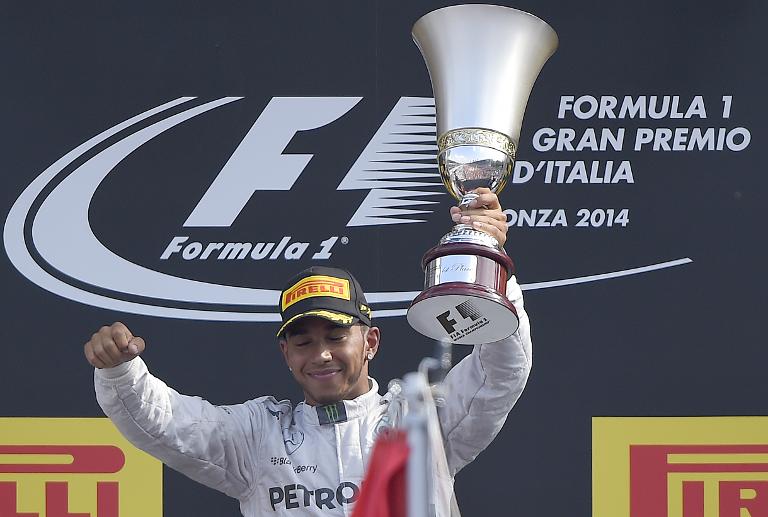 Lewis Hamilton’s father Anthony was so heavily soaked in his victorious son’s champagne on Sunday that he had to change his shirt.

But he did not mind.

Having seen the 29-year-old secure his sixth win of the season to trim Mercedes team-mate Nico Rosberg’s lead to 22 points, with six races remaining, he was happy to be of service.

His son has decided that his family is now so important it may be worth thinking about flying them out to every race.

“I got here with my family and they are the reason I am here today,” said the triumphant driver.

“They don’t come to many races, they watch from home, but I wanted them here — they bring me luck. Maybe I need to be flying them out for every race.”

Alongside father Anthony this weekend was step-mother Linda, whose chicken noodle soup was a key ingredient in the younger Hamilton’s success in his early karting career.

Her presence was part of the recipe for success in Sunday’s Italian Grand Prix when Hamilton overcame setbacks including a poor start that dropped him to fourth to gain his 28th career victory.

“Today was another hard day, but I loved very minute of it,” said Hamilton.

“When you have those issues, you think ‘I’m never going to be able to catch up’, but you can’t let it slip too deep into your thoughts.â€

Asked what went wrong at the start, when he appeared to be slow off the grid, he explained: “It’s a button we press which engages a launch map, so when you stop, you do your bite point find, select a gear and accelerate a bit.

“The map helps you control the RPM. You then let the clutch go and do the perfect start – but it wasn’t working. I’m grateful I was able not to lose that many positionsâ€¦”

He added that it was his own decision to ignore the team’s advice about easing off to save energy for an attack later in the race.

“I have a great team of people who work with me, who give me advice and guide me,” he said. “It’s advice, not ‘you have to do this’.

“They give me a bit of information and take that and decide how to use that. I felt I had the pace at the time so I felt I had to use it now, I was certain it might not come again.

“I knew that was the best time to put pressure on him. I did it a couple of races ago and he doesn’t seem to like it, so I’ll try it a bit more.

“We’ve got a long way to go, but one step at a time. The support I’ve had from the fans and family has been incredible.

“I’m going to take that energy and try and move forwards. I’m just going to take it as it comes. Today I still had a problem. I’m still looking for that weekend where you don’t have any problems…”

“It’s a terrible feeling to lose the lead like that, but in the end Lewis was really quick in the whole race. He came like a rocket and I had to push and I made the mistake.

“It was really tough, it is still tough now and maybe with the pace he had he would have won anyway. He drove really well and deserved it.”